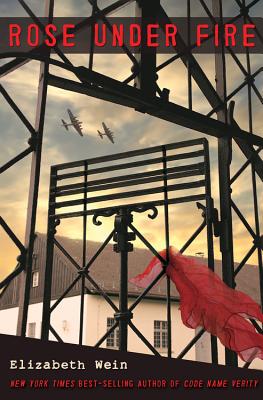 While flying an Allied fighter plane from Paris to England, American ATA pilot and amateur poet, Rose Justice, is captured by the Nazis and sent to Ravensbrück, the notorious women's concentration camp. Trapped in horrific circumstances, Rose finds hope in the impossible through the loyalty, bravery and friendship of her fellow prisoners. But will that be enough to endure the fate that’s in store for her?

Elizabeth Wein, author of the critically-acclaimed and best-selling Code Name Verity, delivers another stunning WWII thriller. The unforgettable story of Rose Justice is forged from heart-wrenching courage, resolve, and the slim, bright chance of survival.   Praise for Rose Under Fire
* “Wein masterfully sets up a stark contrast between the innocent American teen’s view of an untarnished world and the realities of the Holocaust. [A]lthough the story’s action follows [Code Name Verity]’s, it has its own, equally incandescent integrity. Rich in detail, from the small kindnesses of fellow prisoners to harrowing scenes of escape and the Nazi Doctors’ Trial in Nuremburg, at the core of this novel is the resilience of human nature and the power of friendship and hope.” —Kirkus, starred review   * “Wein excels at weaving research seamlessly into narrative and has crafted another indelible story about friendship borne out of unimaginable adversity.” —Publishers Weekly, starred review

Elizabeth Wein (www.elizabethwein.com) was born in New York City, grew up abroad, and currently lives in Scotland with her husband and two children. She is an avid flyer of small planes. She also holds a PhD in Folklore from the University of Pennsylvania.