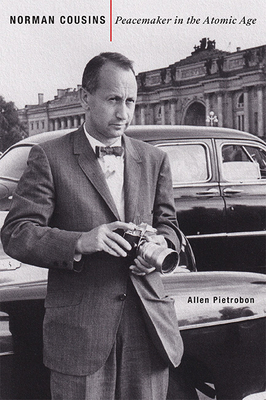 As the editor of the Saturday Review for more than thirty years, Norman Cousins had a powerful platform from which to help shape American public debate during the height of the Cold War. Under Cousins's leadership, the magazine was considered one of the most influential in the literary world. Cousins's progressive, nonpartisan editorials in the Review earned him the respect of the public and US government officials. But his deep impact on postwar international humanitarian aid, anti-nuclear advocacy, and Cold War diplomacy has been largely unexplored.

In this book, Allen Pietrobon presents the first true biography of Norman Cousins. Cousins was much more important than we realize: he was involved in several secret citizen diplomacy missions during the height of the Cold War and, acting as a private citizen, played a major role in getting the Limited Test Ban Treaty signed. He also wrote JFK's famous 1963 American University commencement speech (not merely peace in our time but peace for all time).

This book is a fascinating look at the outsized impact that one individual had on the course of American public debate, international humanitarianism, and the Cold War itself. This biography of the vocal anti-communist and anti-nuclear activist's public life will interest readers across the ideological spectrum.