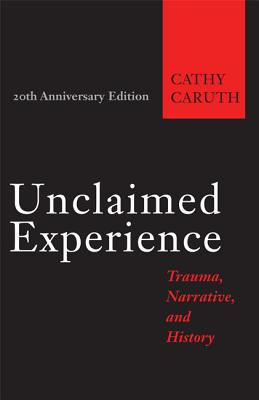 The pathbreaking work that founded the field of trauma studies.

In Unclaimed Experience, Cathy Caruth proposes that in the widespread and bewildering experience of trauma in our century--both in its occurrence and in our attempt to understand it--we can recognize the possibility of a history no longer based on simple models of straightforward experience and reference. Through the notion of trauma, she contends, we come to a new understanding that permits history to arise where immediate understanding may not.

Caruth explores the ways in which the texts of psychoanalysis, literature, and literary theory both speak about and speak through the profound story of traumatic experience. Rather than straightforwardly describing actual case studies of trauma survivors, or attempting to elucidate directly the psychiatry of trauma, she examines the complex ways that knowing and not knowing are entangled in the language of trauma and in the stories associated with it. Caruth's wide-ranging discussion touches on Freud's theory of trauma as outlined in Moses and Monotheism and Beyond the Pleasure Principle. She traces the notion of reference and the figure of the falling body in de Man, Kleist, and Kant; the narratives of personal catastrophe in Hiroshima mon amour; and the traumatic address in Lecompte's reinterpretation of Freud's narrative of the dream of the burning child.

In this twentieth-anniversary edition of her now classic text, a substantial new afterword addresses major questions and controversies surrounding trauma theory that have arisen over the past two decades. Caruth offers innovative insights into the inherent connection between individual and collective trauma, on the importance of the political and ethical dimensions of the theory of trauma, and on the crucial place of literature in the theoretical articulation of the very concept of trauma. Her afterword serves as a decisive intervention in the ongoing discussions in and about the field.

Cathy Caruth is the Frank H. T. Rhodes Professor of Humane Letters at Cornell University. She is the author of Trauma: Explorations in Memory; Literature in the Ashes of History; Empirical Truths and Critical Fictions: Locke, Wordsworth, Kant, Freud; and Listening to Trauma: Conversations with Leaders in the Theory and Treatment of Catastrophic Experience.