Washington's U Street: A Biography (Paperback) 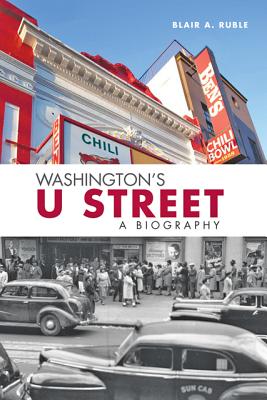 Washington's U Street: A Biography (Paperback)

By Blair A. Ruble

This book traces the history of the U Street neighborhood in Washington, D.C., from its Civil War-era origins to its recent gentrification.

Home throughout the years to important scholars, entertainers, and political figures, as well as to historically prominent African American institutions, Washington's U Street neighborhood is a critical zone of contact between black and white America. Howard University and the Howard Theater are both located there; Duke Ellington grew up in the neighborhood; and diplomat Ralph Bunche, Supreme Court Justice Thurgood Marshall, and medical researcher Charles Drew were all members of the community.

This robustly diverse neighborhood included residents of different races and economic classes when it arose during the Civil War. Jim Crow laws came to the District after the Compromise of 1877, and segregation followed in the mid-1880s. Over the next century, U Street emerged as an energetic center of African American life in Washington. The mid-twentieth-century rise of cultural and educational institutions brought with it the establishment of African American middle and elite classes, ironically fostering biases within the black community. Later, with residential desegregation, many of the elites moved on and U Street entered decades of decline, suffered rioting in 1968, but has seen an initially fitful resurgence that has recently taken hold.

Blair A. Ruble, a jazz aficionado, prominent urbanist, and longtime resident of Washington, D.C., is uniquely equipped to undertake the history of this culturally important area. His work is a rare instance of original research told in an engaging and compelling voice.

Blair A. Ruble is the author of several books about the governance of cities worldwide, including Creating Diversity Capital: Transnational Migrants in Montreal, Washington, and Kyiv and Second Metropolis: Pragmatic Pluralism in Gilded Age Chicago, Silver Age Moscow, and Meiji Osaka, both also published by Johns Hopkins and the Woodrow Wilson Center. Ruble is director of the Kennan Institute and of the Comparative Urban Studies Program at the Woodrow Wilson Center.