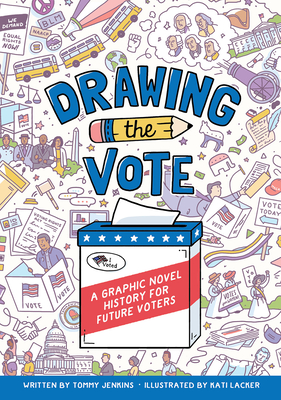 
Not On Our Shelves—Ships in 1-5 Days
How the history of American voting rights have shaped the way we vote today, the perfect primer for future voters—now in paperback!

An updated edition of Tommy Jenkin’s Drawing the Vote aimed at educating young readers.
​Originally published in the lead-up to the 2020 US presidential election, Drawing the Vote: A Graphic Novel History for Future Voters looks at the history of voting rights in the United States and how it has affected the way we vote today. Author and educator Tommy Jenkins was inspired by his students to trace this history from the earliest steps toward democracy during the American Revolution, to the upheaval caused by the Civil War, the fight for women’s suffrage, the civil rights movement, the election of an African American president, and beyond. Along the way, Jenkins identifies events and trends that led to the unprecedented results of the 2016 presidential election that left many Americans wondering, “How did this happen?” At a time when many citizens are experiencing apathy about voting and skepticism concerning our bitterly divided political parties, Drawing the Vote seeks to offer some explanation for how we got here and how every American, young and old, can take action.

The expanded paperback edition features an additional 32 pages of comics that cover the results of the 2020 presidential election and the factors that shaped it, including the COVID-19 pandemic and the January 6 insurrection.
Tommy Jenkins is the humanities division chair at Louisburg College in Louisburg, North Carolina, and an associate professor of English. He resides in Raleigh, North Carolina. Kati Lacker is an illustrator, designer, and screen printer currently living in Brooklyn. This is her first graphic novel.
"Jenkins’s rousing work will inspire students to educate themselves on the issues—and, when the time comes, to vote early and often."
— School Library Journal - STARRED review

“This is a great year to brush up voting rights, especially the laws surrounding distance voting, and this book is a great start.”
— GeekMom

“Written with a progressive tone, this work’s clear factual nature makes it a worthy read for anyone across the political spectrum…”
— Library Journal

“A panoptic history of the vote that breaks down everything from gerrymandering to Americans for Prosperity's dark influence, Drawing the Vote is a great pick for both adults and young Americans who want to understand what it means to be a voter.”
— Shelf Awareness

"The exposition and Lacker’s simple but energetic illustrations combine to pack valuable information on each page, while making even complex issues (such as the racism of white suffragists who fought for the 19th Amendment) easy to follow. Suited best to younger readers new to the topic, Jenkins’s work lays out the high-stakes history clearly and succinctly."
— Publishers Weekly