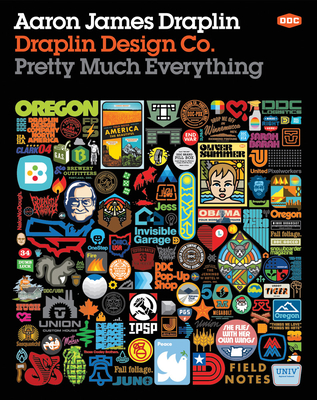 
Not On Our Shelves—Ships in 1-5 Days
Esquire. Ford Motors. Burton Snowboards. The Obama Administration. While all of these brands are vastly different, they share at least one thing in com­mon: a teeny, little bit of Aaron James Draplin. Draplin is one of the new school of influential graphic designers who combine the power of design, social media, entrepreneurship, and DIY aesthetic to create a successful business and way of life.

Pretty Much Everything is a mid-career survey of work, case studies, inspiration, road stories, lists, maps, how-tos, and advice. It includes examples of his work—posters, record covers, logos—and presents the process behind his design with projects like Field Notes and the “Things We Love” State Posters. Draplin also offers valuable advice and hilarious commentary that illustrates how much more goes into design than just what appears on the page. With Draplin’s humor and pointed observations on the contemporary design scene, Draplin Design Co. is the complete package for the new generation of designers.
Aaron James Draplin is the founder of the Draplin Design Co., based in Portland, Oregon. He has created print, identity, and illustration work for Timberline Lodge, Woolrich, Patagonia, Nike, Mark Maron, and Sasquatch Festival, among others.
“Aaron Draplin is sort of like the Bernie Sanders of graphic design. . . . Now the designer is dropping a book called Pretty Much Everything (out May 17), and according to the official announcement it’s going to be a ‘mid-career survey of work, case studies, inspiration, road stories, lists, covers, and logos.’ Chances are it’s probably going to be pretty damn funny, too.”
— WIRED