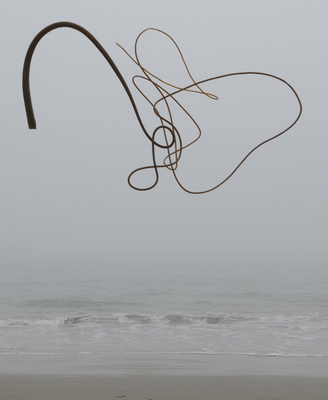 
Special Order—Subject to Availability
On an almost daily basis, Andy Goldsworthy makes art using the materials and conditions he encounters wherever he is, be it the land around his Scottish home, the mountain regions of France or Spain, or the sidewalks of New York City, Glasgow, or Rio de Janeiro. Out of earth, rocks, leaves, ice, snow, rain, sunlight, and shadow he creates works that exist briefly before they are altered and erased by natural processes. They are documented in his photographs, and their larger meanings are bound up with the forces that they embody: materiality, temporality, growth, vitality, permanence, decay, chance, labor, and memory.

Ephemeral Works features approximately 200 of these works, selected by Goldsworthy from thousands he has made between 2001 and the present and arranged in chronological sequence, capturing his creative process as it interacts with material, place, and the passage of time and seasons.
Andy Goldsworthy is a British artist whose permanent works are located throughout the world, in museums, and on private and public lands. He lives in Scotland.