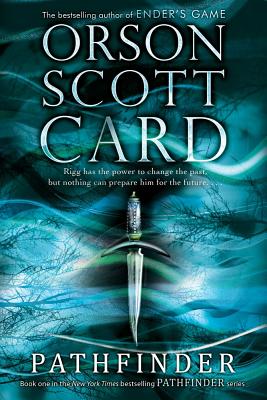 This is book number 1 in the Pathfinder Trilogy series.

“Orson Scott Card's talent for writing simply enough for a younger audience to enjoy but complex enough to captivate an older one as well is on display in Pathfinder, a story about Rigg, a young, gifted boy whose father's sudden death starts him on a journey of discovery. The journey leads Rigg to discover who he really is and the secret origin of the world in which he lives. Pathfinder is a great read for anybody with a love for science fiction.”
— Curtis Bunton, Ravenous Reader, Charleston, SC

From Orson Scott Card, the internationally bestselling author of Ender’s Game, comes the first novel in the Pathfinder trilogy, the riveting story of Rigg, a teenager who possesses a special power that allows him to see the paths of people’s pasts.

A powerful secret. A dangerous path.

Rigg is well trained at keeping secrets. Only his father knows the truth about Rigg's strange talent for seeing the paths of people's pasts. But when his father dies, Rigg is stunned to learn just how many secrets Father had kept from him—secrets about Rigg's own past, his identity, and his destiny. And when Rigg discovers that he has the power not only to see the past, but also to change it, his future suddenly becomes anything but certain.

Rigg’s birthright sets him on a path that leaves him caught between two factions, one that wants him crowned and one that wants him dead. He will be forced to question everything he thinks he knows, choose who to trust, and push the limits of his talent…or forfeit control of his destiny.
Orson Scott Card is the author of numerous bestselling novels and the first writer to receive both the Hugo and Nebula awards two years in a row; first for Ender’s Game and then for the sequel, Speaker for the Dead. He lives with his wife in North Carolina.

"The implications of the boys' power to manipulate the past unfold cleverly…, feeding into the Machiavellian political intrigue for a pulse-pounding climax….Card's many fans will be thrilled by this return to his literary roots.” --Kirkus

* "Fast paced and thoroughly engrossing, the 650-plus pages fly by, challenging readers to care about and grasp sophisticated, confusing, and captivating ideas." --Booklist, starred review

"Card entwines two stories in this fascinatingly complex series opener....The result is an amalgamation of adventure, politics, and time travel that invokes issues of class and the right to control one's own life. Yet despite its complexity, the book is never less than page-turning. While Card delves deeply into his story's knotted twists and turns, readers should have no trouble following the philosophical and scientific mysteries, which the characters are parsing right along with them. An epic in the best sense." --PW, starred review