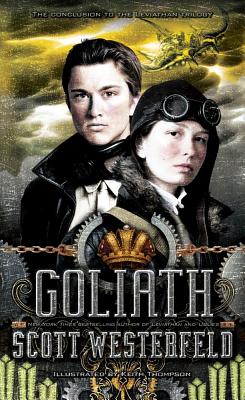 This is book number 3 in the The Leviathan Trilogy series.

Alek and Deryn are on the last leg of their round-the-world quest to end World War I, reclaim Alek’s throne as prince of Austria, and finally fall in love. The first two objectives are complicated by the fact that their ship, the Leviathan, continues to detour farther away from the heart of the war (and crown). And the love thing would be a lot easier if Alek knew Deryn was a girl. (She has to pose as a boy in order to serve in the British Air Service.) And if they weren’t technically enemies.
The tension thickens as the Leviathan steams toward New York City with a homicidal lunatic on board: Secrets suddenly unravel, characters reappear, and nothing is as it seems in this thunderous conclusion to Scott Westerfeld’s brilliant trilogy.
Scott Westerfeld is the author of the Leviathan series, the first book of which was the winner of the 2010 Locus Award for Best Young Adult Fiction. His other novels include the New York Times bestseller Afterworlds, the worldwide bestselling Uglies series, The Last Days, Peeps, So Yesterday, and the Midnighters trilogy. Visit him at ScottWesterfeld.com or follow him on Twitter at @ScottWesterfeld.