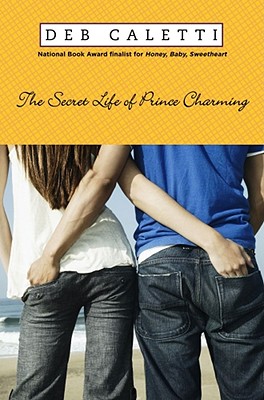 “Quinn is determined to set things right with all of the women her womanizing father has wronged. Enlisting the help of her stepsister, she sets out to make things right and, along the journey, she mends her broken heart as well. Told with great humor, this is a road trip to remember!”
— Hallie Wilkins, Anderson's Bookshop, Naperville, IL

Quinn teams up with the half-sister she’s never met to right their father’s wrongs in this thoughtful, funny, and layered novel by National Book Award finalist and Printz Honor medal winner Deb Caletti.

Maybe it was wrong, or maybe impossible, but I wanted the truth to be one thing. One solid thing.

Quinn is surrounded by women who have had their hearts broken. Between her mother, her aunt, and her grandmother, Quinn hears nothing but cautionary tales. And when she is abruptly and unceremoniously dumped, Quinn starts to think maybe there really are no good men.

It doesn’t help that she’s gingerly handling a renewed relationship with her formerly absent father. He’s a little bit of a lot of things: charming, selfish, eccentric, lazy… But he’s her dad, and Quinn’s just happy to have him around again. Until she realizes how horribly he’s treated the many women in his life, how he’s stolen more than just their hearts. Determined to, for once, take action in her life, Quinn joins forces with the half-sister she’s never met and the little sister she’ll do anything to protect. Together, they set out to right her father’s wrongs…and in doing so, begin to uncover what they’re really looking for: the truth.

Once again, Deb Caletti has created a cast of lovably flawed characters who bond over the shared experiences of fear, love, pain, and joy—in other words, real life.
Deb Caletti is the award-winning and critically acclaimed author of over sixteen books for adults and young adults, including Honey, Baby, Sweetheart, a finalist for the National Book Award; A Heart in a Body in the World, a Michael L. Printz Honor Book; Girl, Unframed; and One Great Lie. Her books have also won the Josette Frank Award for Fiction, the Washington State Book Award, and numerous other state awards and honors, and she was a finalist for the PEN USA Award. She lives with her family in Seattle.