The Queen of Everything (Paperback) 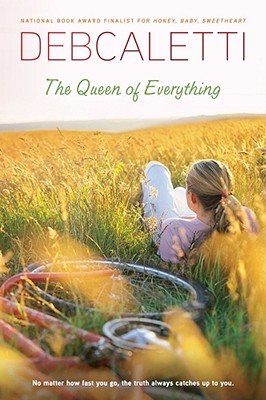 The Queen of Everything (Paperback)


Not On Our Shelves—Ships in 1-5 Days
Jordan MacKenzie had a typical teenage life until her father’s affair with a married woman threatens to implode her entire world in this searing and poignant novel from Printz Honor medal winner and National Book Award finalist Deb Caletti.

People ask me all the time what having Vince MacKenzie for a father was like. What they mean is, was he always crazy?

High school junior Jordan MacKenzie’s life was pretty typical: fractured family, new boyfriend, dead-end job. She’d been living with her father, the predictable optometrist, since her mother, the hippie holdover, had become too embarrassing to be around. Jordan felt that she finally had as normal a life as she could. Then came Gayle D’Angelo.

Jordan knew her father was dating Gayle and that Gayle was married. Jordan knew it was wrong and that her father was becoming someone she didn’t recognize anymore, but what could she do about it? And how could she—how could anyone—have possibly guessed that this illicit love affair would implode in such a violent and disturbing way?
Deb Caletti is the award-winning and critically acclaimed author of over sixteen books for adults and young adults, including Honey, Baby, Sweetheart, a finalist for the National Book Award; A Heart in a Body in the World, a Michael L. Printz Honor Book; Girl, Unframed; and One Great Lie. Her books have also won the Josette Frank Award for Fiction, the Washington State Book Award, and numerous other state awards and honors, and she was a finalist for the PEN USA Award. She lives with her family in Seattle.
"Captivating details make this scandalous story seem all too real."

"The book unfolds the drama slowly and suspensefully, creating an everyday teen world that's perceptive, funny, and nuanced in its own right..."

-- Bulletin of the Center for Children's Books, starred review

"Gothic with an edge...The characters leap to life...Caletti expertly succeeds in capturing the way a smart teen can grasp and skewer her world..."