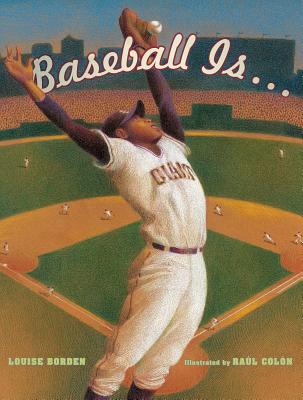 
Special Order—Subject to Availability
The ultimate celebration of an all-American sport, this picture book captures the joy and the history of baseball—and knocks it out of the park!

Don’t wait for Opening Day to start your baseball season! Crack open Baseball Is… and revel in the fun of this all-American game! Perfect for the stats-counting superfan and the brand-new little leaguer, Baseball Is… captures the spirit of this cherished pastime, honoring its legendary past, and eagerly anticipating the future of the sport that is “stitched into our history.”
Louise Borden graduated from Denison University with a degree in history. She taught first graders and preschoolers and later was a part-owner of a bookstore in Cincinnati, Ohio. In addition to writing children’s books, she also speaks regularly to young students about the writing process. Her books include Good Luck, Mrs. K!, which won the Christopher Medal, and The A+ Custodian. She lives in Cincinnati, Ohio, and you can visit her at LouiseBorden.com.

Raúl Colón has illustrated several highly acclaimed picture books including the New York Times bestselling Angela and the Baby Jesus by Frank McCourt and Susanna Reich’s José! Born to Dance, which received a starred review in Booklist. Mr. Colón lived in Puerto Rico as a young boy and now resides in New City, New York, with his family.
"This is a beautiful, well-crafted text that will be welcomed and embraced by fans of the game."
— School Library Journal

"Verse rises well above the quotidian with a genuine flash of poetic power hitting...Colón highlights players, sportscasters, teams, and stadiums from across the country and over time, inviting young fans to search for their favorites and vie with their peers for the title of baseball cognoscente....it may just help some kids keep their spirits up until opening day."
— BCCB

*"Love of our national game shines in every word and picture. A grand slam."
— Kirkus Reviews, starred review

"More than a decade after America Is..., Borden returns with a rosy tribute to the national pastime... It’s a warm and passionate ode to the game, whether it’s being played in stadiums or backyards."
— Publishers Weekly