He Forgot to Say Goodbye (Hardcover) 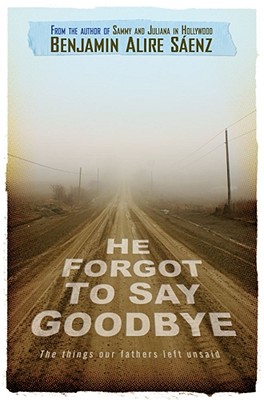 He Forgot to Say Goodbye (Hardcover)


Special Order—Subject to Availability
"I mean, it's not as if I want a father. I have a father. It's just that I don't know who he is or where he is. But I have one."

Ramiro Lopez and Jake Upthegrove don't appear to have much in common. Ram lives in the Mexican-American working-class barrio of El Paso called "Dizzy Land." His brother is sinking into a world of drugs, wreaking havoc in their household. Jake is a rich West Side white boy who has developed a problem managing his anger. An only child, he is a misfit in his mother's shallow and materialistic world. But Ram and Jake do have one thing in common: They are lost boys who have never met their fathers. This sad fact has left both of them undeniably scarred and obsessed with the men who abandoned them. As Jake and Ram overcome their suspicions of each other, they begin to move away from their loner existences and realize that they are capable of reaching out beyond their wounds and the neighborhoods that they grew up in. Their friendship becomes a healing in a world of hurt.

San Antonio Express-News wrote, "Benjamin Alire Sáenz exquisitely captures the mood and voice of a community, a culture, and a generation"; that is proven again in this beautifully crafted novel.
Benjamin Alire Sáenz is an author of poetry and prose for adults and teens. He was the first Hispanic winner of the PEN/Faulkner Award and a recipient of the American Book Award for his books for adults. He is the author of Aristotle and Dante Discover the Secrets of the Universe, which was a Printz Honor Book, the Stonewall Award winner, the Pura Belpré Award winner, the Lambda Literary Award winner, and a finalist for the Amelia Elizabeth Walden Award, and its sequel, Aristotle and Dante Dive into the Waters of the World. His first novel for teens, Sammy and Juliana in Hollywood, was an ALA Top Ten Book for Young Adults and a finalist for the Los Angeles Times Book Prize. His second book for teens, He Forgot to Say Goodbye, won the Tomás Rivera Mexican American Children’s Book Award, the Southwest Book Award, and was named a New York Public Library Book for the Teen Age. He lives in El Paso, Texas.
"He Forgot to Say Goodbye is a beautiful, powerfully moving story with three absolutely unforgettable teen characters. Sáenz has done a remarkable job of creating two memorably idiosyncratic voices that just - well - detroyed me! Effen brilliant!" - Michael Cart, former president of YALSA and ALAN

"Sáenz's skill with language is such that it makes me as a reader slow down to savor the sentences...Many readers will see themselves in these two young men who manage to confront the demons in their lives and survive." - Teri Lesesne, professor, Sam Houston State University

"He Forgot to Say Goodbye is a story about what it is to become a man...I have, in fact, now spent a lot of quality time with Ramiro and Jake and can say that this one is right up there with my all-time favorite YAs." - Richie Partington, Richie's Picks