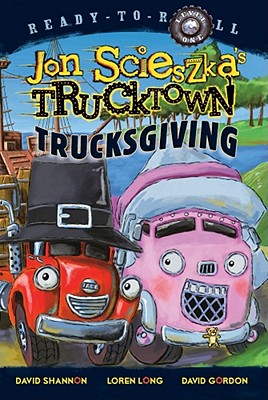 
Special Order—Subject to Availability
Join in on the Thanksgiving traditions of Trucktown in this addition to the New York Times bestselling Ready-to-Read series by Jon Scieszka.

After scooping dirt, spraying water, and mixing cement, the first trucks of Trucktown want to do something for all of the trucks that helped them build Trucktown.

Combining the traditions of Thanksgiving with the well-known fun of Trucktown, they create special ways for all trucks to celebrate Trucksgiving year after year!

This level one Ready-to-Read book is the perfect read to teach new readers about Thanksgiving through the excitement of Trucktown with easy sight words, a simple plot, and a familiar topic.
Jon Scieszka is the creator of Trucktown, including the New York Times bestselling Smash, Crash!, and the author of The True Story of the 3 Little Pigs!, the Time Warp Trio series, Caldecott Honor Book The Stinky Cheese Man, and many other books that inspire kids to want to read. He has worked as an elementary school teacher and is the founder of GuysRead.com, a literacy initiative for boys.

David Shannon has written and illustrated numerous award winning picture books including Duck on a Bike, the Caldecott Honor Book No David!, How I Learned to be a Pirate, and Good Boy Fergus. He is also one of the collaborative illustrators in Jon Scieszka’s Trucktown series.  David lives with his wife and his daughter in Los Angeles.

Loren Long illustrated President Barack Obama’s Of Thee I Sing; the newest version of The Little Engine that Could by Watty Piper; Madonna’s second picture book, Mr. Peabody’s Apples; Nightsong by Ari Berk; Frank McCourt’s Angela and the Baby Jesus; Love by Matt de la Peña; and If I Was the Sunshine by Julie Fogliano. He also wrote and illustrated the Otis series and was part of the Design Garage for Jon Scieszka’s Trucktown series. Loren’s work has appeared in Time, Sports Illustrated, Forbes, The Wall Street Journal, and The Atlantic. He lives with his wife and two sons in Cincinnati, Ohio. Visit him at LorenLong.com.