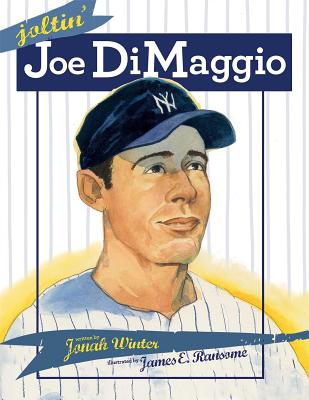 
Special Order—Subject to Availability
Bestselling author Jonah Winter and award-winning illustrator James E. Ransome knock it out of the park with this tribute to one of the greatest baseball players who ever lived, Joe DiMaggio.

In the golden age of baseball, sports announcers ruled the radio, winning and losing was front-page news, and just about every young boy wanted to grow up to wear Yankee pinstripes, including Giuseppe Paolo DiMaggio, Jr., a first generation Italian from San Francisco.

“Baseball is not a job,” said young Joe’s dad, but through hard work and dedication, Joe grew up to make headlines as a top centerfielder and ace hitter—Joltin’ Joe, the Yankee Clipper. And when the paychecks started rolling in and the newspaper reporters wouldn’t stop calling, you can bet Pop was mighty proud!

During the Depression and WWII the country needed something to cheer for, and Joe was the star player who outshone the rest, even marrying movie star Marilyn Monroe—all by keeping his mouth shut and his eye on the ball.
Jonah Winter is the award-winning author of more than forty nonfiction picture books that promote environmental awareness and social and racial justice. Among them are The Snow Man; The Little Owl & the Big Tree: A Christmas Story; Oil; The Secret Project; Ruth Bader Ginsburg: The Case of R.B.G. vs. Inequality; My Name is James Madison Hemings; Barack; The Founding Fathers!; and Lillian’s Right to Vote, a Jane Addams Children’s Book Award recipient and Kirkus Prize finalist.

James E. Ransome’s highly acclaimed illustrations for Before She Was Harriet received the 2018 Coretta Scott King Illustrator Honor. His other award-winning titles include the Coretta Scott King winner The Creation; Coretta Scott King Honor Book Uncle Jed’s Barbershop; Sweet Clara and the Freedom Quilt; and Let My People Go, winner of the NAACP Image Award. He frequently collaborates with his wife, author Lesa Cline-Ransome. One of their recent titles is Game Changers: The Story of Venus and Serena Williams, which received four starred reviews and was an ALA Notable Children’s Book. James is a professor and coordinator of the MFA Illustration Graduate Program at Syracuse University. He lives in New York’s Hudson River Valley region with his family. Visit James at JamesRansome.com.