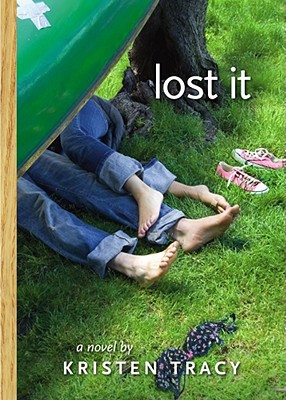 
Special Order—Subject to Availability
What would you do...

...if your best friend were plotting the annihilation of a small, furry neighborhood poodle? Or if your parents up and moved to an Outward Bound-type survival camp in the middle of the desert? How about if your grandmother bought you new bras and underwear -- and you actually thought they were a teensy bit, umm, sexy?

Most people would not react well.

Tess Whistle's junior year of high school is off to a fairly bizarre start. One might even say her life is spiraling out of control. But with her sense of humor firmly intact and her first real boyfriend on her arm, Tess is dealing with the ridiculous twists quite well, thankyouverymuch.

Just wait until her shoes explode.
Kristen Tracy is the author of Lost It, Crimes of the Sarahs, and Hung Up. She has received three Pushcart nominations and her poems and stories have appeared in various journals and reviews. She is the coeditor of A Chorus for Peace: A Global Anthology of Poetry by Women. Kristen lives in Rhode Island.