Vindicated: Big Names, Big Liars, and the Battle to Save Baseball (Paperback) 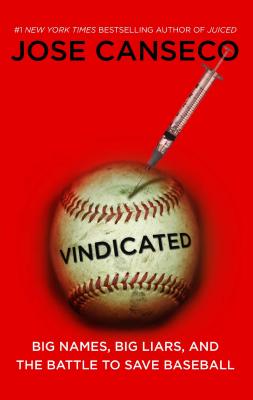 Vindicated: Big Names, Big Liars, and the Battle to Save Baseball (Paperback)


Not On Our Shelves—Ships in 1-5 Days
Vindicated is the New York Times bestselling memoir from Jose Canseco with shocking new details about Major League Baseball's steroid epidemic.

In 2005, Jose Canseco blew the lid off Major League Baseball's steroid scandal—and no one believed him. His New York Times bestselling memoir Juiced met a firestorm of criticism and outrage from the media, coaches, clubs, and players, many of whom Canseco had personally introduced to steroids—with a needle in the ass. Baseball's former golden boy, Rookie of the Year, onetime Most Valuable Player, and owner of two World Series rings was called a liar.

Now, steroids are back in the headlines. Record-breaking athletes are falling from grace, and the infamous Mitchell Report confirmed the names of major leaguers who have indeed used steroids while others remain under investigation. The answer is clear: Jose Canseco told the truth. And why wouldn't he? He started it all.

Finally, in Vindicated, Canseco picks up where Juiced left off, revealing details even more shocking than in his controversial first book. He spills never-before-implicated names—arguably the biggest in the game of baseball—and explores the mystery of one celebrated player about whom key information was suddenly excised from Juiced at the last minute. He talks candidly about what the Mitchell Report did—and didn't—get right, why steroid use became so rampant, and how his life has changed since he tore the lid off Pandora's box.

Lest there be any doubt about theveracity of his claims, Canseco subjected himself to three lie detector tests, one of which was conducted by a former FBI special agent and top polygraph examiner who investigated the Unabomber, Whitewater, the Oklahoma City bombing, and the 1993 bombing of the World Trade Center.

Transcripts of those taped interviews are also included in this straight-talking examination of the current state of baseball.

This time, he's not just out to clear his name. He's out to clean up the game.
Jose Canseco was born in Havana, Cuba, and immigrated to Miami with his family in the 1970s. He was drafted by the Oakland Athletics, eventually playing for seven different major-league teams, winning several awards, and hitting 462 home runs in his seventeen-year career. Today, Canseco lives a quiet life in California with his daughter, Josie.