Long Way Down: An Epic Journey by Motorcycle from Scotland to South Africa (Paperback) 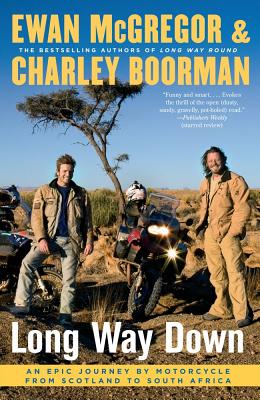 Long Way Down: An Epic Journey by Motorcycle from Scotland to South Africa (Paperback)


Not On Our Shelves—Ships in 1-5 Days
Now in paperback, this second remarkable travel book from famed actor Ewan McGregor and his good friend Charley Boorman chronicles their epic adventure ride on motorbikes from Scotland to South Africa.

After their fantastic trip around the world in 2004, recounted to acclaim in Long Way Round, Ewan McGregor and Charley Boorman couldn’t shake the travel bug. Inspired by their UNICEF visits to Africa, they knew they had to go back and experience this extraordinary continent in more depth.

In Long Way Down, they share their 15,000-mile journey, from the northernmost tip of Scotland to the southernmost tip of South Africa, to ride some of the toughest terrain in the world. Along the way, from the pyramids in Egypt to Luke Skywalker’s house in Tunisia, they meet people who have triumphed over terrifying experiences—former child soldiers in Uganda and children living amidst the minefields of Ethiopia. They have a close encounter with a family of gorillas in Rwanda and are nearly trampled by a herd of elephants in Botswana. Riding through spectacular scenery, often in extreme temperatures, they face their hardest challenges yet. With their trademark humor and honesty, they tell their story—the drama, the dangers, and the sheer exhilaration of riding together again through a continent filled with magic and wonder.
Ewan McGregor was born in Perthshire in 1971. An actor who has appeared in more than thirty films -- Trainspotting, Velvet Goldmine, Moulin Rouge, and the second Star Wars trilogy among them -- he rides an MV Augusta F4S and a KTM Duke. He lives in London with his wife and two daughters.

Charley Boorman was born in England, grew up in Ireland, and currently lives in London with his family. An actor whose first starring role was in Deliverance, he met his costar Ewan while shooting The Serpent's Kiss. He rides a Ducati 748 and is preparing for the2006 Paris -- Dakar rally, if his wife lets him