Planet Google: One Company's Audacious Plan to Organize Everything We Know (Paperback) 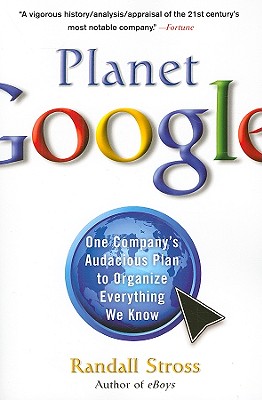 Planet Google: One Company's Audacious Plan to Organize Everything We Know (Paperback)

Based on unprecedented access to the "Googleplex," Planet Google goes deep inside the company to unveil the extraordinary scope and scale of its ambition to become the master gate-keeper of "all the world’s information," including its users’ most personal information. New York Times columnist Randall Stross provides a lively tour through Google’s flurry of new information gathering initiatives. Will Google stay true to its famous "Don’t Be Evil" mantra? Will it protect all of the personal information it collects? Planet Google is a much-needed wake-up call about how powerful the Google juggernaut has become.
Randall Stross writes the New York Times column Digital Domain and is professor of business at San Jose State University. He is the author of several critically acclaimed books, including The Wizard of Menlo Park, eBoys, and The Microsoft Way. He lives in Burlingame, California.
"A computer enthusiast who wants to Google Google couldn't find a more dedicated guide than Stross....Stross's access to the company pays off nicely for both Google's fans and people who read books on paper." -- Time

"[An] even-handed and highly readable history of the company." -- Wall Street Journal

"In this spellbinding behind-the-scenes look at Google, Stross provides an intimate portrait of the company's ambitious aim to 'organize the world's information.'...The narrative reads like a suspense novel." -- Publishers Weekly

"A vigorous history/analysis/appraisal of the 21st century's most notable company." -- Fortune