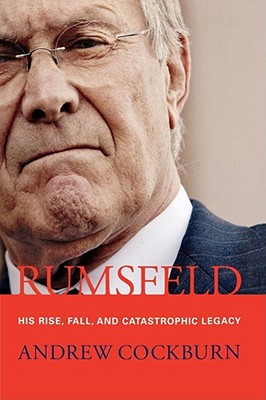 
Special Order—Subject to Availability
Donald Rumsfeld, who as secretary of defense oversaw the army, navy, air force, and marines from 2001 to December 2006, is widely blamed for the catastrophic state of America's involvement in Iraq. In his groundbreaking book Rumsfeld, Washington insider Andrew Cockburn details Rumsfeld's decisions in the wars in Iraq and Afghanistan and also shows how his political legacy stretches back decades and will reach far into the future.

Relying on sources that include high-ranking officials in the Pentagon and the White House, Rumsfeld goes far beyond previous accounts to reveal a man consumed with the urge to dominate each and every human encounter, and whose aggressive ambition has long been matched by his inability to display genuine leadership or accept responsibility for egregious error. Cockburn exposes Rumsfeld's early career as an Illinois congressman, his rise to prominence as an official in the Nixon White House, his careful maneuvering to avoid the fallout of the Watergate scandal, and his skillful infighting as secretary of defense under President Ford. Cockburn also chronicles for the very first time Rumsfeld's subsequent tenure as CEO of G. D. Searle (and his devoted efforts to get governmental approval for the controversial artificial sweetener aspartame) as well as his interesting behavior in secret high-level government nuclear war games in the years he was out of power.

President George W. Bush's hasty elevation of Rumsfeld as his secretary of defense proved historic, for it was the triumvirate of Bush, Vice President Dick Cheney, and Rumsfeld who plunged America into the disastrous quagmire of the war in Iraq. Cockburn reveals how Rumsfeld's habits of intimidation, indecision, ignoring awkward realities, destructive micromanagement, and bureaucratic manipulation all helped doom America's military adventure. The book challenges the notion that Rumsfeld was an effective manager driven to transform the American military, examines the reasons that Rumsfeld was removed from office, and shows how his second appointment as secretary of defense reflects a deep conflict between President Bush and his father, former president George H. W. Bush.

Brimming with powerful revelations, Rumsfeld is sure to emerge as the must-have piece of investigative journalism as America grapples with its difficult involvement in Iraq and the uncertain path the country faces today.
Andrew Cockburn is a writer and lecturer on defense and national affairs, and is also the author of five nonfiction books. He has written for The New York Times, The New Yorker, Playboy, Vanity Fair, and National Geographic, among other publications. He currently lives in Washington, D.C.

"Andrew Cockburn's great new biography is a short book that packs a big punch. Who knew that Rumsfeld really, really wanted to be president, or that Rumsfeld was AWOL for awhile on 9/11, or that Rumsfeld brushed off warnings of an attack prior to that day, or that he lined up retired generals to sing his praises after the invasion of Iraq? There's lots of new material in Cockburn's book, and it's well-organized."

"[A] perceptive and engrossing biography... Cockburn argues that Rumsfeld's disastrous tenure cannot be fully understood without examining his earlier career. He demonstrates that Rumsfeld was an inveterate schemer, skilled at evading responsibility for his decisions. Though Cockburn sometimes places the most sinister construction possible on Rumsfeld's actions, his overall account is quite persuasive." -- Jacob Heilbrunn, The New York Times Book Review