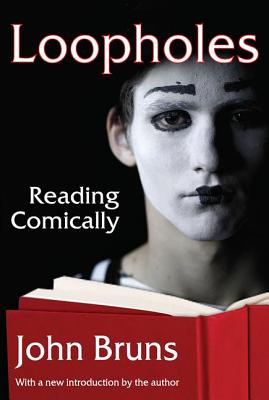 Much writing about comedy tends to begin and end with Aristotle's claim that comedy is inferior to tragedy, trivializing comedy as cheap or as a temporary distraction from things that really matter. Such writing either presents exhaustive taxonomies of kinds of humor--like wit, puns, jokes, humor, satire, irony--or engages in pointless political endgames, moral dialogues, or philosophical perceptions. Comedy is rarely presented as a mode of thought in its own right, as a way of understanding, not something to be understood.

John Bruns' guiding assumption is that comedy is not simply a literary or theatrical genre, to be differentiated from tragedy or from romance, but a certain way of disclosing, perhaps undoing, the way the world is organized. When we view the world in terms of what is incompatible, we are reading comically. In this sense, comedy exists outside the alternatives of tragic and comic.

Loopholes argues that trivialization of comedy comes from fear that it will address our anxieties with honesty--and it is this truth that scares us. John Bruns discusses comedy as a mode of thought with a cognitive function. It is a domain of human understanding, a domain far more troubling and accessible than we care to acknowledge. To read comically we must accept our fears. If we do so, we will realize what Bruns refers to as the most neglected premise of comedy, that the world itself is a loophole--both incomplete and limitless.