Cosa Nostra: A History of the Sicilian Mafia (Paperback) 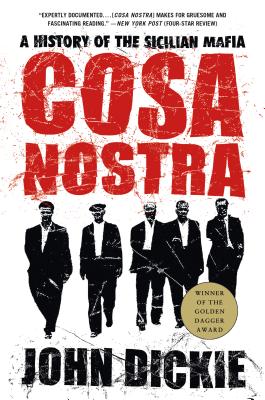 Cosa Nostra: A History of the Sicilian Mafia (Paperback)

Hailed in Italy as the best book ever written about the mafia in any language, Cosa Nostra is a fascinating, violent, and darkly comic account that reads like fiction and takes us deep into the inner sanctum of this secret society where few have dared to tread.In this gripping history of the Sicilian mafia, John Dickie uses startling new research to reveal the inner workings of this secret society with a murderous record. He explains how the mafia began, how it responds to threats and challenges, and introduces us to the real-life characters that inspired the American imagination for generations, making the mafia an international, larger than life cultural phenomenon. Dickie's dazzling cast of characters includes Antonio Giammona, the first "boss of bosses''; New York cop Joe Petrosino, who underestimated the Sicilian mafia and paid for it with his life; and Bernard "the Tractor" Provenzano, the current boss of bosses who has been hiding in Sicily since 1963.

John Dickie is Senior Lecturer in Italian, University College London, and is the author of Darkest Italy: The Nation and Stereotypes of the Mezzogiorno, 1860-1900.

“The inspiration of far too much pulpy entertainment, the Italian mobsters under John Dickie's miscroscope in Cosa Nostra have long cultivated outsiders' tendencies to romanticize their supposed honor and loyalty. But Dickie demonstrates definitively that the centuries-old mafia has never been more than an illegal business and shadow state pursuing 'power and money by cultivating the art of killing people.'” —The Washington Post

“His is the first truly definitive English-language study of this myth-laden subject, and it is a pleasure to read...his book is notable for shrewd judgments couched in language that is vibrantly memorable. His acquaintance with the island and his immersion in the wider modern Italian culture also allow him to convey the noxious atmo-sphere of corruption with flair.” —Christopher Sylvester, The Sunday Times (London)

“A serious contribution to modern Italian history . . . it can be safely predicted that Dickie's book will be a sensation, not least because it has a dozen potential movies in it.” —Clive James, Times Literary Supplement

“I couldn't put it down. His archival sleuthing is yoked to his powerful, often coruscating storytelling to create a chilling account of the mafia's sinister, horrific reality.” —John Guy, The Sunday Times

“Absorbing . . . He succeeds in being both opinionated and precise and has performed a necessary work of rebranding.” —Financial Times

“A brave work.” —Mail on Sunday

“Highly readable . . . compelling. The narrative is entertaining and, at times, as chilling as the darkest crime fiction. It combines compelling horror with clear, rational analysis.” —Glasgow Herald