Visions, Trips, and Crowded Rooms: Who and What You See Before You Die (Paperback) 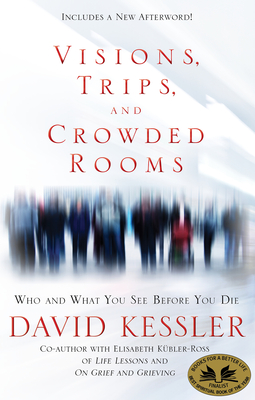 Visions, Trips, and Crowded Rooms: Who and What You See Before You Die (Paperback)


Not On Our Shelves—Ships in 1-5 Days
David Kessler, one of the most renowned experts on death and grief, takes on three uniquely shared experiences that challenge our ability to explain and fully understand the mystery of our final days. The first is "visions." As the dying lose sight of this world, some people appear to be looking into the world to come. The second shared experience is getting ready for a "trip." The phenomenon of preparing oneself for a journey isn’t new or unusual. In fact, during our loved ones’ last hours, they may often think of their impending death as a transition or journey. These trips may seem to us to be all about leaving, but for the dying, they may be more about arriving. Finally, the third phenomenon is "crowded rooms." The dying often talk about seeing a room full of people, as they constantly repeat the word crowded. In truth, we never die alone. Just as loving hands greeted us when we were born, so will loving arms embrace us when we die. In the tapestry of life and death, we may begin to see connections to the past that we missed in life. While death may look like a loss to the living, the last hours of a dying person may be filled with fullness rather than emptiness. In this fascinating book, which includes a new Afterword, Kessler brings us stunning stories from the bedsides of the dying that will educate, enlighten, and comfort us all.
David Kessler is one of the most well-known experts and lecturers on death and grief. His first book, The Needs of the Dying, a #1 best-selling hospice book, received praise by Mother Teresa. His services have been used by Elizabeth Taylor, Jamie Lee Curtis, and Marianne Williamson when their loved ones faced life-challenging illnesses. He also worked with late actors Anthony Perkins and Michael Landon.Kessler’s work has been featured on CNN, NBC, PBS, and Entertainment Tonight; and he has been interviewed on Oprah & Friends. He has been discussed in The New York Times and The New Yorker, and he is a contributing writer for Oprah.com as well as an AOL.com Health Expert. He has also written for The Boston Globe, the Los Angeles Times, the San Francisco Chronicle, The Wall Street Journal, and Anderson Cooper 360°.
“David Kessler writes of a world that is rarely talked about, much less examined with such sensitivity. His stories reveal dimensions of the death experience that are anything but depressing, and at times absolutely joyful. In a book filled with intriguing and inspirational tales, Kessler makes a compelling argument that death is not the end.”
— Marianne Williamson, the New York Times best-selling author of The Age of Miracles and A Course in Weight Loss

“I so remember David Kessler in the old days of The Hayride, a support group I started in West Hollywood. He and his work were so vital and so heartwarming to our group, who shared those frightening moments of crises in the early days of the AIDS epidemic. His very presence with those approaching death was like being enveloped in a safe, cozy space. No harm could come to you if David was around. In fact, I recently asked him to be there when it is my time to go. This book shares David’s wisdom and his love, and helps all of us who enter unknown waters.”
— Louise Hay, the New York Times best-selling author of You Can Heal Your Life