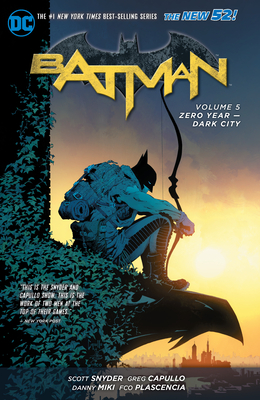 This is book number 5 in the Batman (DC Comics Paperback) series.

Before the Batcave and Robin, the Joker and the Batmobile ... there was Zero Year.

The Riddler has plunged Gotham City into darkness. How will a young Dark Knight bring his beloved hometown from the brink of chaos and madness and back into the light? From the critically acclaimed, New York Times #1 best-selling creative team of Scott Snyder and Greg Capullo, Batman Vol. 5: Zero Year--Dark City is the concluding volume to Batman's origin story, as you've never seen it before.

Collects Batman #25-27 and 29-33.
Scott Snyder is one of comics' best young writers. His current works include BATMAN, SUPERMAN UNCHAINED, AMERICAN VAMPIRE and SWAMP THING. He has also been published in Zoetrope, Tin House, One-Story, Epoch, Small Spiral Notebook, and other journals, and has a short story collection, Voodoo Heart, which was published by Dial Press. He teaches at Columbia University and Sarah Lawrence University and lives in New York with his wife, Jeanie, and his son, Jack Presley.
"This is easily the best understanding of the hallmarks of Snyder's Batman run: Gotham as character and as contemporary urban center."--Popmatters

"One of the best comic books I've read this year - perhaps the best... this is the Snyder and Capullo show. This is the work of two men at the top of their games. They have never been more confident in their storytelling."--New York Post

"BATMAN: ZERO YEAR is well on its way to establishing itself as the new origin gospel in the New DC Universe."--Craveonline

"Snyder and Capullo's vision of "Zero Year" feels large and compelling right off the bat, and it makes you want to read more. This is how I want all of my epics to begin."--Comic Book Resources

"It's not just a great Batman story, but a great Bruce Wayne story."--MTV Geek