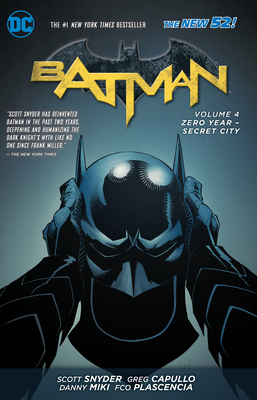 This is book number 4 in the Batman (DC Comics Paperback) series.

Before the era of superheroes began-before the Batman spread his wings to protect the innocent and punish the evil-Gotham City's prodigal son, Bruce Wayne, had been missing for years. But this was exactly the cover of darkness Bruce needed. Patrolling Gotham's streets in a series of disguises, he began a career as a faceless vigilante.

Scott Snyder is one of comics' best young writers. His current works include Batman, Batman: Eternal Superman Unchained, American Vampire and Swamp Thing. He has also been published in Zoetrope, Tin House, One-Story, Epoch, Small Spiral Notebook, and other journals, and has a short story collection, Voodoo Heart, which was published by Dial Press. He teaches at Columbia University and Sarah Lawrence University and lives in New York with his wife, Jeanie, and his son, Jack Presley.
Praise for Scott Snyder and Greg Capullo's BATMAN:

"This is a book you need to read. Whether you're a fan of comics or not."—Huffington Post

"One of the best Batman runs in the history of the character."—IGN

"A+. The hero's got personality (and is unafraid to release a quip as sharp as a Batarang), a horde of supervillains, gumption to spare and a whole host of high-tech gadgetry to suitably impress longtime fans and those new to the Dark Knight."—USA Today

"Brilliant. This is a modernization of Silver Age optimism replacing camp with today's dialogue expectations of introspection and smart wit. Pure comic gold."—Ain't it Cool News