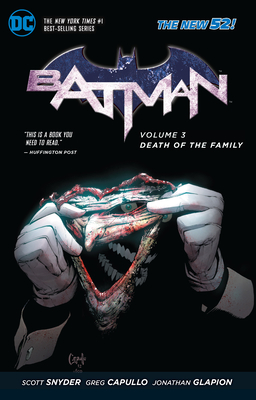 This is book number 3 in the Batman (DC Comics Paperback) series.

One year ago, the Joker limped off the streets of Gotham, mutilated and scarred when someone had taken the pale white skin right off of his face.

But now, the Dark Knight’s greatest foe has returned but for once, Batman doesn’t seem to be his target. Instead, the Joker turns his vile hatred towards Commissioner Gordon, Alfred, Robin, Nightwing, Batgirl, Red Hood and Red Robin … the only family Bruce Wayne has left. The Clown Prince of Crime will unleash his most unpredictable, vicious and psychotic assault ever on everyone Batman holds dear.

Can Batman stop his arch-rival’s most deranged assault ever? Or will the cost of a deadly secret be a family member’s life?

#1 New York Times best-selling creators Scott Snyder (American Vampire) and Greg Capullo (Spawn) present the long-awaited return of the Joker, as he unleashes his most terrifying, personal assault ever on the Dark Knight. Batman: Death of The Family collects Batman #13-17 along with backup stories illustrated by award-winning artist Jock (Batman: The Black Mirror).

Scott Snyder is the bestselling and award-winning writer of Batman, American Vampire and Swamp Thing as well as the short story collection Voodoo Heart.  He teaches writing at Sarah Lawrence College, NYU and Columbia University. He lives on Long Island with his wife, Jeanie, and his sons Jack and Emmett.  He is a dedicated and un-ironic fan of Elvis Presley.
"This is a book you need to read. Whether you're a fan of comics or not. If you're a fan of good storytelling and can buy into the conceit that a man dressed as a bat can make a difference in the world, then there's no better book for you than this one."—Huffington Post

"One of the best Batman runs in the history of the character. The fact that two of the biggest names in the industry are handling the return of the Joker is just icing on the cake."—IGN