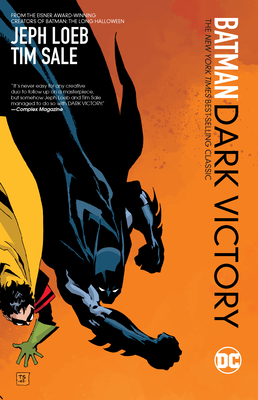 
Not On Our Shelves—Ships in 1-5 Days
In this sequel to the legendary Batman: The Long Halloween, another mystery killer has sprouted in Gotham City, but it's not the town we all quite knew.

Once a place controlled by organized crime, Gotham City suddenly finds itself being run by lawless freaks, such as Poison Ivy, Mr. Freeze, and the Joker. It is still early in Batman's crimefighting career, but the Dark Knight is on the verge of completing his transformation into the city's greatest defender. However, nothing he has experienced thus far—not even a new sidekick named Robin—will prepare him for the Hangman.

With the murders reminiscent of the Holiday killing spree just a year ago, Batman will have to call on every one of his detective's instincts to solve a mystery that goes even deeper—and more dangerous—than any he's faced before.

From the juggernaut creative team of Jeph Loeb and Tim Sales comes Batman: Dark Victory, one of the finest stories in the Dark Knight's fabled lore. Collects issues #0-13.
Jeph Loeb is an Emmy award nominated and Eisner award winning writer/producer living in Los Angeles. In television, his many credits include Smallville, Lost and Heroes and in film, Teen Wolf and Commando. In comics, he is best known for his work with the supremely talented artist and partner-in-crime Tim Sale on Batman: The Long Halloween, Superman for All Seasons, Catwoman: When in Rome for DC as well as Daredevil Yellow, Spider-Man Blue and Hulk Gray for Marvel.

Tim Sale is not only the artist for the numerous collaborations with Jeph Loeb listed above, but has also worked on Deathblow, Batman: Legends of The Dark Knight, Grendel, Wolverine/Gambit: Victims, Billi 99, Amazon, and various other projects. He had the distinct honor of being the first creator chosen for the artist spotlight series Solo.
“writer Jeph Loeb's brilliance shines through”—IGN