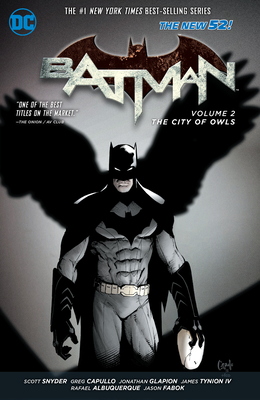 For over a century, the Court of Owls has ruled Gotham City in secret—their reach inescapable, their power unstoppable.

Until they battled the Batman.

Gotham's vigilante protector managed to escape the talons of the Court with his mind and body barely intact. The Dark Knight managed to win the battle with his deadly new aggressors, but certainly not the war. Batman was just the first part of their conquest. Now they have their sights set on something much bigger: Gotham City.

Scott Snyder is the bestselling and award-winning writer of Batman, American Vampire and Swamp Thing as well as the short story collection Voodoo Heart.  He teaches writing at Sarah Lawrence College, NYU and Columbia University. He lives on Long Island with his wife, Jeanie, and his sons Jack and Emmett.  He is a dedicated and un-ironic fan of Elvis Presley.
Praise for Scott Snyder's Batman: Court of Owls Vol. 1:

“A+. The hero's got personality (and is unafraid to release a quip as sharp as a Batarang), a horde of supervillains, gumption to spare and a whole host of high-tech gadgetry to suitably impress longtime fans and those new to the Dark Knight.” —USA Today

“This is one of the best comics of the week.”  —The New York Times

“[Writer Scott Snyder] pulls from the oldest aspects of the Batman myth, combines it with sinister-comic elements from the series’ best period, and gives the whole thing terrific forward-spin by setting up an honest-to-gosh mystery for Batman to solve.” —Entertainment Weekly

“Scott Snyder, already the company's greatest asset over the last four weeks, spins a stack of plates immediately…. Too often Batman comics focus heavily on the hero persona … Snyder sets up equal amounts of conflict for both Wayne's public and private personas.” —Time Out Chicago