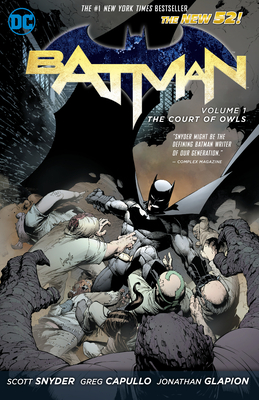 This is book number 1 in the Batman (DC Comics Paperback) series.

The reader will experience the story from Batman’s viewpoint on pages 108-117.

After a series of brutal murders rocks Gotham City, Batman begins to realize that perhaps these crimes go far deeper than appearances suggest. As the Caped Crusader begins to unravel this deadly mystery, he discovers a conspiracy going back to his youth and beyond to the origins of the city he's sworn to protect.

Batman has heard tales of Gotham City’s Court of Owls: that the members of this powerful cabal are the true rulers of Gotham. The Dark Knight dismissed the stories as rumors and old wives’ tales. Gotham was his city. Until now.

A brutal assassin is sinking his razor-sharp talons into the city’s best and brightest, as well as its most dangerous and deadly. If the dark legends are true, his masters are more powerful predators than the Batman could ever imagine.

This now-classic graphic novel from the #1 New York Times bestselling creative team of Scott Snyder and Greg Capullo is not just fantastic jumping-on point for any new reader, but one of the great Batman stories ever told. With every year that passes, this masterpiece becomes more entrenched into this medium’s pantheon of the greatest stories ever told.

Collects issues #1-7 of Batman.
Scott Snyder is the bestselling and award-winning writer of Batman, American Vampire and Swamp Thing as well as the short story collection Voodoo Heart.  He teaches writing at Sarah Lawrence College, NYU and Columbia University. He lives on Long Island with his wife, Jeanie, and his sons Jack and Emmett.  He is a dedicated and un-ironic fan of Elvis Presley.
“A+. The hero's got personality (and is unafraid to release a quip as sharp as a Batarang), a horde of supervillains, gumption to spare and a whole host of high-tech gadgetry to suitably impress longtime fans and those new to the Dark Knight.” —USA Today

“This is one of the best comics of the week.”  —The New York Times

“[Writer Scott Snyder] pulls from the oldest aspects of the Batman myth, combines it with sinister-comic elements from the series’ best period, and gives the whole thing terrific forward-spin by setting up an honest-to-gosh mystery for Batman to solve.” —Entertainment Weekly

“Scott Snyder, already the company's greatest asset over the last four weeks, spins a stack of plates immediately…. Too often Batman comics focus heavily on the hero persona … Snyder sets up equal amounts of conflict for both Wayne's public and private personas.” —Time Out Chicago

“A stunning debut…. Snyder knows these characters, sets up an intriguing mystery, and delivers some action that Capullo realizes stunningly. This is definitely in the top rank of the revamp. —The Onion/AV Club

“Hits all the right notes. I enjoyed the living hell out of this.” —io9

“Bruce Wayne is a badass. The end.” —IGN

“There's enough here, kept at a high enough level to make it interesting and viable across media and digestible enough for even the most novice DC Universe reader…. Score one for DC and score one for Snyder and Capullo in finding a new fan.”—Comic Book Resources