Batman: A Death in the Family (Paperback) 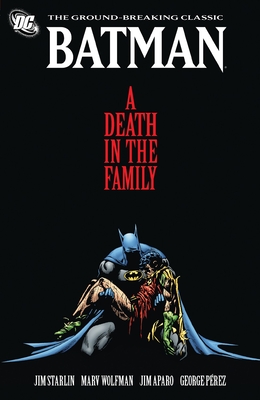 Batman: A Death in the Family (Paperback)


Not On Our Shelves—Ships in 1-5 Days
In 1988, Batman readers were allowed to vote on the outcome of the story... and they decided that Robin should die! Jim Starlin's devastating graphic novel classic left shockwaves throughout the comic book industry, many of which are still felt today!

As the second person to assume the role of Batman's sidekick, Jason Todd had a completely different personality than the original Robin. Rash and prone to ignore Batman's instructions, Jason was always quick to act without regard to consequences. In this fatal instance, Robin ignores his mentor's warnings when he attempts to take on the Joker by himself and pays the ultimate price. Driven by anger with Superman by his side, Batman seeks his vengeance as he looks to end the Joker's threat forever.

This tale of loss, guilt and brutality is considered one of the most defining pieces in the Dark Knight's mythology. Batman: A Death in the Family collects Batman #426-429.
Jim Starlin is the acclaimed author of classic graphic novels including, for DC Comics, Cosmic Odyssey and Batman: A Death in the Family, as well as the 1982 Marvel graphic novel The Death of Captain Marvel.  His other works include the space operas Warlock and Dreadstar.

In a career that has spanned nearly 30 years, Marv Wolfman has helped shape the heroic careers of DC Comics' Green Lantern, Blackhawk, and the original Teen Titans, as well as Marvel Comics' Fantastic Four, Spider-Man, and Nova. In addition to co-creating The New Teen Titans and the universe-shattering Crisis on Infinite Earths with George Pérez, Wolfman was instrumental in the revamp of Superman after Crisis, the development of The New Teen Titans spin-off series Vigilante, Deathstroke the Terminator, and Team Titans, and created such characters as Blade for Marvel, along with Night Force and the retooled Dial "H" For Hero for DC. In addition to his numerous comic book credits, Wolfman has also written several novels and worked in series television and animation, including the Superman cartoon of the late 1980s and currently the hit Teen Titans show on Cartoon Network.