Starvation Heights: A True Story of Murder and Malice in the Woods of the Pacific Northwest (Paperback) 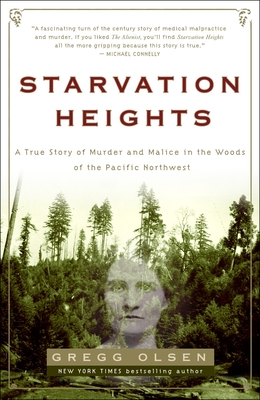 Starvation Heights: A True Story of Murder and Malice in the Woods of the Pacific Northwest (Paperback)


Backordered
In this true story—a haunting saga of medical murder set in an era of steamships and gaslights—Gregg Olsen reveals one of the most unusual and disturbing criminal cases in American history.

In 1911 two wealthy British heiresses, Claire and Dora Williamson, arrived at a sanitorium in the forests of the Pacific Northwest to undergo the revolutionary “fasting treatment” of Dr. Linda Burfield Hazzard. It was supposed to be a holiday for the two sisters, but within a month of arriving at what the locals called Starvation Heights, the women underwent brutal treatments and were emaciated shadows of their former selves.

Claire and Dora were not the first victims of Linda Hazzard, a quack doctor of extraordinary evil and greed. But as their jewelry disappeared and forged bank drafts began transferring their wealth to Hazzard’s accounts, the sisters came to learn that Hazzard would stop at nothing short of murder to achieve her ambitions.
Gregg Olsen is the author of several works of nonfiction and fiction, including the New York Times bestseller Abandoned Prayers. A journalist and investigative author for more than two decades, Olsen has received numerous awards and much critical acclaim for his writing. The Seattle native now lives in rural Washington state with his wife, twin daughters, cat, and six chickens.
“A fascinating turn-of-the-century story of medical malpractice and murder. If you liked The Alienist, you'll find Starvation Heights all the more gripping because this story is true.” —Michael Connelly

“An engrossing and compelling look at a shocking crime in another era. Olsen’s deft touch takes us back to the early 1900s so cleverly that reading Starvation Heights is akin to stepping into a time machine.” —Ann Rule

“An account of real-life villainry that outdoes anything a novelist might concoct.” —Les Standiford, author of Meet You in Hell