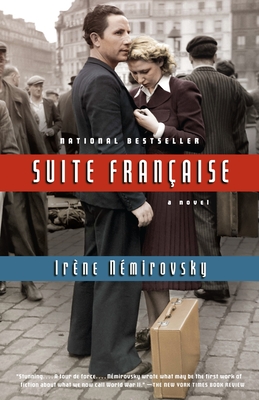 NATIONAL BESTSELLER • The remarkable story of men and women thrown together in circumstances beyond their control during World War II—a heartrending "portrait of a small French town under seige, and the people trying to survive, even to live, as Hitler’s horrors march closer and closer to their doors" (New York).

Beginning in Paris on the eve of the Nazi occupation in 1940, as Parisians flee the city, human folly surfaces in every imaginable way: a wealthy mother searches for sweets in a town without food; a couple is terrified at the thought of losing their jobs, even as their world begins to fall apart. Moving on to a provincial village now occupied by German soldiers, the locals must learn to coexist with the enemy—in their town, their homes, even in their hearts.

When Irène Némirovsky began working on Suite Française, she was already a highly successful writer living in Paris. But she was also a Jew, and in 1942 she was arrested and deported to Auschwitz, where she died. For sixty-four years, this novel remained hidden and unknown.

Irène Némirovsky was born in Kiev in 1903 into a wealthy banking family and emigrated to France during the Russian Revolution. After attending the Sorbonne, she began to write and swiftly achieved success with her first novel, David Golder, which was followed by The Ball, The Flies of Autumn, Dogs and Wolves and The Courilof Affair. She died in 1942.

ONE OF THE ATLANTIC'S 15 BOOKS YOU WON'T REGRET RE-READING

"An incisive, heartbreaking portrait of a small French town under seige, and the people trying to survive, even to live, as Hitler’s horrors march closer and closer to their doors. . . . A masterpiece of observation and character study, a standout of Holocaust literature." —New York

“[Némirovsky] sees the fullness of humanity. . . . A lost masterpiece.” —O, the Oprah Magazine

“Transcendent, astonishing. . . . The last great fiction of the war.” —The Pittsburgh Post-Gazette

“Extraordinary. . . . A work of Proustian scope and delicacy, by turns funny and deeply moving.” —Time