The Rights of the People: How Our Search for Safety Invades Our Liberties (Paperback) 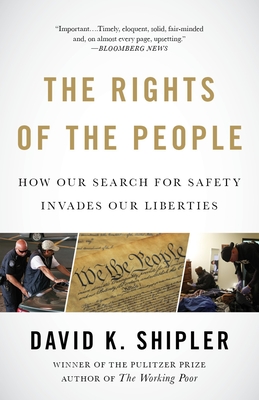 The Rights of the People: How Our Search for Safety Invades Our Liberties (Paperback)

An impassioned, incisive look at the violations of civil liberties in the United States that have accelerated over the past decade—and their direct impact on our lives.

How have our rights to privacy and justice been undermined? What exactly have we lost? Pulitzer Prize–winner David K. Shipler searches for the answers to these questions by traveling the midnight streets of dangerous neighborhoods with police, listening to traumatized victims of secret surveillance, and digging into dubious terrorism prosecutions. The law comes to life in these pages, where the compelling stories of individual men and women illuminate the broad array of government’s powers to intrude into personal lives. Examining the historical expansion and contraction of fundamental liberties in America, this is the account of what has been taken—and of how much we stand to regain by protesting the departures from the Bill of Rights. And, in Shipler’s hands, each person’s experience serves as a powerful incitement for a retrieval of these precious rights.

David K. Shipler reported for The New York Times from 1966 to 1988 in New York, Saigon, Moscow, Jerusalem, and Washington, D.C. He is the author of four other books, including the best sellers Russia and The Working Poor, and Arab and Jew, which won the Pulitzer Prize. Shipler, who has been a guest scholar at the Brookings Institution and a senior associate at the Carnegie Endowment for International Peace, has taught at Princeton University; at American University in Washington, D.C.; and at Dartmouth College. He lives in Chevy Chase, Maryland.

“Important. . . . I suspect Shipler’s arguments will speak to . . . most Americans. . . . The Rights of the People is timely, eloquent, solid, fair-minded and, on almost every page, upsetting.” —Craig Seligman, Bloomberg

“If you ever wondered how the erosion of constitutional liberties affects ordinary people, this is the book to read. Shipler shows us, through carefully drawn and often moving accounts of real-life encounters between individuals and the state, the true cost of sacrificing liberty for security.” —David Cole, author of No Equal Justice

“This powerful book demonstrates the reality behind abstract debates about liberty and security, and shows us what happens when liberty starts to erode.” —Linda Greenhouse, author of Becoming Justice Blackmun

“David Shipler has done something extraordinary. He took the guarantees in our Constitution and explored, on the ground, how they were actually being applied in the lives of Americans. The result is a wonderful book that shows how large a gap there is between constitutional promises and reality.” —Anthony Lewis, author of Gideon’s Trumpet

“An insightful analysis of the erosion of basic civil liberties within the past decade . . . A sobering look at the rights Americans take for granted.” —Booklist (Starred review)

“Shipler’s sure grasp of frequently impenetrable Supreme Court decisions (translated nicely for the non-lawyer), his engaged reporting and his generally evenhanded assessment of the reasons for these sometimes abrupt, mostly incremental intrusions on our freedoms make for an informed, persuasive argument. A timely call for vigilence.” —Kirkus

“David Shipler's panoramic canvas portrays in vivid detail how our right to be ‘secure against unreasonable searches and seizures’ (in the words of the Bill of Rights) is being undermined not only by the excesses of our antiterrrorism strategies but also by everyday policing. As a consummate reporter, Shipler has done a prodigious service to the Constitution by going beyond abstractions to show why we, like the framers, should insist on safeguarding the Fourth Amendment's protection of our privacy, liberty, and individuality.”  —Susan Herman, president of the ACLU and author of Taking Liberties: The War on Terror and the Erosion of American Democracy