Boeing versus Airbus: The Inside Story of the Greatest International Competition in Business (Paperback) 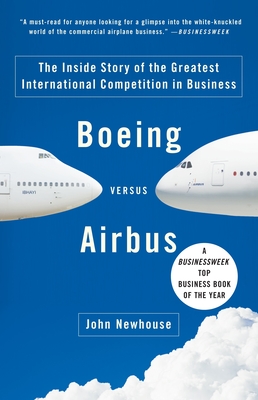 Boeing versus Airbus: The Inside Story of the Greatest International Competition in Business (Paperback)

The commercial airline industry is one of the most volatile, dog-eat-dog enterprises in the world, and in the late 1990s, Europe’s Airbus overtook America’s Boeing as the preeminent aircraft manufacturer. However, Airbus quickly succumbed to the same complacency it once challenged, and Boeing regained its precarious place on top. Now, after years of heated battle and mismanagement, both companies face the challenge of serving burgeoning Asian markets and stiff competition from China and Japan. Combining insider knowledge with vivid prose and insight, John Newhouse delivers a riveting story of these two titans of the sky and their struggles to stay in the air.

John Newhouse has written seven books and for many years was the Washington correspondent for The New Yorker. He lives in Washington, D.C.

“A must-read for anyone looking for a glimpse into the white-knuckled world of the commercial airplane business.”—BusinessWeek“One of the great business stories of our times.”—The Chicago Tribune“An epic narrative. . . . There is nothing quite like it . . . [and there’s] no better commentator on this sporting struggle than John Newhouse.” —The Economist“Mr. Newhouse gives us a tutorial on a number of important issues that affect all participants in the global marketplace.” —The Washington Times