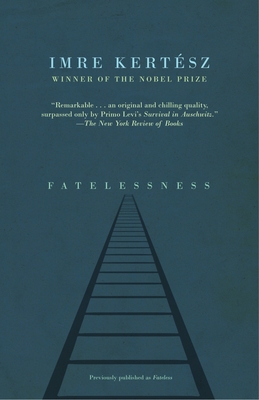 
Not On Our Shelves—Ships in 1-5 Days
At the age of 14 Georg Koves is plucked from his home in a Jewish section of Budapest and without any particular malice, placed on a train to Auschwitz. He does not understand the reason for his fate. He doesn’t particularly think of himself as Jewish. And his fellow prisoners, who decry his lack of Yiddish, keep telling him, “You are no Jew.” In the lowest circle of the Holocaust, Georg remains an outsider.
The genius of Imre Kertesz’s unblinking novel lies in its refusal to mitigate the strangeness of its events, not least of which is Georg’s dogmatic insistence on making sense of what he witnesses–or pretending that what he witnesses makes sense. Haunting, evocative, and all the more horrifying for its rigorous avoidance of sentiment, Fatelessness is a masterpiece in the traditions of Primo Levi, Elie Wiesel, and Tadeusz Borowski.
“Remarkable . . . an original and chilling quality, surpassed only by Primo Levi’s Survival in Auschwitz” —The New York Review of Books

“In his writing Imre Kertész explores the possibility of continuing to live and think as an individual in an era in which the subjection of human beings to social forces has become increasingly complete. [He] upholds the fragile experience of the individual against the barbaric arbitrariness of history.” —The Swedish Academy, The Nobel Prize in Literature 2002

“[S]hould be savored slowly . . . Only through exploring its subtlety and detail will the reader come to appreciate such an ornate and honest testimony to the human spirit.” —The Washington Times