Tapas: A Taste of Spain in America: A Cookbook (Hardcover) 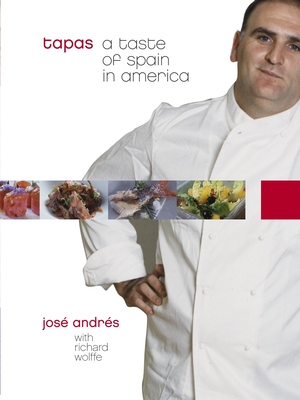 Tapas: A Taste of Spain in America: A Cookbook (Hardcover)


In Stock—Click for Locations
A classic Spanish cookbook from José Andrés, a humanitarian, James Beard Award winner, New York Times bestselling author, and one of TIME's 100 Most Influential People.

Tapas are Spain's gift to the world of great cooking: a fresh and fun way to eat with friends and family—and easy to make at home. Using simple Mediterranean ingredients, a tapas feast is a perfect combination of little dishes packed with big flavors. Tapas by José Andrés is the first major book in a generation to celebrate this world-renowned way of eating, from a man who is the best possible authority: an award-winning Spanish chef in America, with seven highly acclaimed restaurants to his name. Named Bon Appétit's Chef of the Year, José is a star in American cooking, as well as the nation's leading expert on Spanish cuisine. Having worked as a chef in the United States for two decades, he's also a thoroughly American cook who draws on American ingredients for his inspiration, and is a master at translating his native Spanish cooking for this country's kitchens. His simple and delicious recipes include:

• Fish such as American Red Snapper Baked in Salt; Monkfish with Romesco Sauce; and Basque-Style Stuffed Maryland Blue Crabs
• Chicken including Catalan-Style Chicken Stew; Chicken Sautéed with Garlic; and Chicken with Lobster
• Pork such as Chorizo Stewed in Hard Cider; Figs with Spanish Ham; and Roasted Pork Tenderloin with Apples
• Rice dishes including Lobster Paella; Black Rice with Squid and Shrimp; and Traditional Rice with Clams

All these recipes are full of tremendous flavor and creativity, as well as in-depth ingredient notes and a rich atmosphere that will transport you to the lush countryside, hip cafés, and sun-drenched coasts of Spain—and back again to dinner at home.
José Andrés grew up in the Asturias region of northern Spain and was a protégé of Ferran Adria of the renowned El Bulli restaurant near Barcelona. In 2003, José was named Best Chef in the Mid-Atlantic by the James Beard Foundation and in 2004 was named Chef of the Year by Bon Appétit. José and his ThinkFoodGroup run seven destination restaurants in and around Washington, D.C., including the Spanish tapas bar Jaleo and the highly acclaimed minibar by José Andrés. His second cookbook, Made in Spain, was published in 2008. He lives in Washington, D.C., with his wife and three daughters.

Richard Wolffe is Senior White House Correspondent for Newsweek magazine. In his spare time, he eats José's food and cowrites his food magazine stories. He lives close to José in Washington, D.C., with his wife, Paula, and their three children. His first book was The Victim's Fortune (HarperCollins, 2002); this is his first cookbook.
"Hero of the Spanish Revolution . . . José Andrés helped create the Spanish food boom in America." —Food & Wine

"José Andrés represents the broad spectrum of Spanish (and Hispanic) cooking . . . better than anybody else in America today." —Colman Andrews, Saveur

“José Andrés is Big Daddy for all things Spanish in America—and Tapas is the mother lode for anyone interested in ‘tiny bite’ cuisine or the exciting and the rapidly expanding Iberian influences that are changing the world of cooking. The future is Spain—and this book will prepare you for it.” —Anthony Bourdain

“José Andrés has done an admirable job of bringing the authentic taste of Spain—especially Spanish tapas and the tapas style of eating—to the American restaurant scene. Now he brings his knowledge and enthusiasm for the extraordinary cooking of his homeland to our homes with this handsome volume.” —Penelope Casas

“Small plates are the only way to fully experience a great chef’s style and flavors. Thank you, José, for sharing your creations with us.” —Jean-Georges Vongerichten

“I’m certain that for many this book will change their view of Spanish cooking. It goes without saying that José is already one of the world’s best chefs and has a bright future before him.” —Ferrán Adriá