We See Each Other: A Black, Trans Journey Through TV and Film (Hardcover) 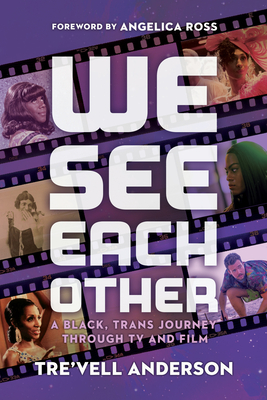 We See Each Other: A Black, Trans Journey Through TV and Film (Hardcover)


Coming Soon—Pre-Order Now
A groundbreaking look at the history of transgender representation in TV and film, by an of-the-moment and in-demand culture reporter.

WE SEE EACH OTHER is a personal history of trans visibility since the beginning of moving images. A literary reckoning, it unearths a transcestry that’s long existed in plain sight and in the shadows of history’s annals, and further contextualizes our present moment of increased representation. The films and television shows that Tre’vell covers include: Midnight In The Garden Of Good And Evil, Psycho, Holiday Heart, Boy’s Don’t Cry, America’s Next Top Model, Some Like It Hot, Survivor, Tangerine, Pose, RuPaul's Drag Race and much more. Though there have been trans memoirs and histories, there has never been a book quite like this, nor is anyone more suited to write it than Tre’vell.

“I don’t remember exactly when I was taught to hate myself," says Tre’vell Anderson in We See Each Other's introduction. As the narrative unfolds, Tre'vell knits together the history of trans people on screen with stories of their life growing up and their formative experiences as a Black, trans journalist.
Tre’vell Anderson is a journalist who knows so many of the contemporary trans movers and shakers who will be featured throughout WE SEE EACH OTHER. Named to The Root’s 2020 list of the 100 most influential African Americans, the former Director of Culture and Entertainment at Out magazine has dedicated their career to centering those in the margins, grey spaces, and at the intersections of life through a pop culture lens. Tre’vell is currently co-host of the Maximum Fun podcast, FANTI, Editor-At-Large for the Toronto-based Xtra magazine, and a well sought-after moderator and commentator. Their writing can be found in the Los Angeles Times, the Washington Post, Essence, Teen Vogue, Esquire and Cultured magazines among other publications.