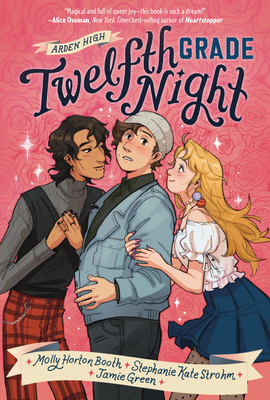 The course of true love never did run smooth . . . and neither does high school in this new graphic novel series for fans of Heartstopper and The Prince and the Dressmaker.

Vi came to Arden High for a fresh start and a chance to wear beanies and button-ups instead of uniform skirts. And though doing it without her twin feels like being split in half, Vi finds her stride when she stumbles (literally!) into broody and beautiful poet-slash-influencer, Orsino. Soon Vi gets roped into helping plan the school’s Twelfth Grade Night dance, and she can’t stop dreaming about slow dancing with Orsino under the fairy lights in the gym.

The problem? All Vi’s new friends assume she’s not even into guys. And before Vi can ask Orsino to the dance, he recruits Vi to help woo his crush, Olivia. Who has a crush of her own . . . on Vi.

Star-crossed love abounds in this hilarious and romantic story of self-discovery, mistaken identities, and the magic that happens when we open our hearts to something new.
Molly Booth (they/she) is the author of Saving Hamlet and Nothing Happened, and a total Shakespeare nerd. Molly grew up homeschooled and earned their BA in English from Marlboro College and their MA in English from UMass Boston (studying—twist!—Shakespeare). Twelfth Night was the first play she ever directed as a drama teacher, and the production featured a wonderful cast of teen actors, including her sister as Feste the Fool, as well as a soundtrack featuring Carly Rae Jepsen and Taylor Swift. Molly lives in Baltimore, Maryland, where they spend a lot of time with their partner, family, and the rest doting on their pets. You can visit her on Instagram @MollyHortonBooth and on her website, MollyHortonBooth.com.

Stephanie Kate Strohm (she/her) is also the author of Prince in Disguise; Love à la Mode; The Date to Save; It’s Not Me, It’s You; That's Not What I Heard; and Restless Hearts (Katy Keene #1). In high school, she was voted Class Star, played Olivia in Twelfth Night, and once won a drama prize (it was not a prize for starting drama, although she could have won that, too). After graduating from Middlebury College with a degree in theater and history, she performed at several of America's least-attended outdoor summer Shakespeare theaters. She still knows all of Juliet's lines, just in case. Stephanie lives and writes in Los Angeles. You can find her online at StephanieKateStrohm.com and on Twitter and Instagram @StephKateStrohm.

Jamie Green (they/them) is a book illustrator, content creator, and alum of Ringling College of Art and Design '20. In high school, they were all about fandom culture, LGBTQIA topics, and anime/manga, which was perfect training to illustrate a romcom love triangle graphic novel (art school probably helped, too). When they aren't doing illustration for books, they can be found tattooing, lifting weights, or exploring outdoors. You can find Jamie on Instagram and Twitter @JamieMGreenArt or just Jamie Green on YouTube.

"Magical and full of queer joy—this book is such a dream!"
—Alice Oseman, New York Times best-selling author of Heartstopper<br><br>

“Twelfth Grade Night is a heartfelt and expressive graphic novel with memorable characters, emotive art, and an engaging story. I loved it!"
—Kevin Panetta, author of Bloom<br>