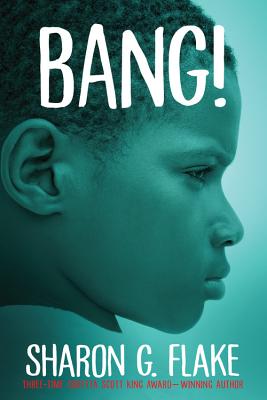 
Not On Our Shelves—Ships in 1-5 Days
As violence continues in his community, a 13-year-old boy must make some difficult choices to set his life on another course.

Bang! And people bleed from everywhere, and blood is redder than you think.

And little kids look funny in caskets. That's 'cause they ain't meant to be in one, I guess.

Mann is only thirteen, yet he has already had to deal with more than most go through in a lifetime. His family is still reeling from the tragic shooting death of his little brother, Jason, each person coping with grief in his or her own way. Mann's mother has stopped eating and is obsessed with preserving Jason's memory, while his father is certain that presenting a hard edge is the only way to keep his remaining son from becoming a statistic. Mann used to paint and ride horseback, but now he's doing everything he can to escape his emotions: getting involved in fights at school, joyriding at midnight, and much worse. His father, at his wit's end, does the only thing he thinks will teach his son how to be a man: he abandons him and his friend Kee-Lee in the woods, leaving them to navigate their way home, alone.

Now Mann, struggling to find his way back to civilization, must also reconcile himself to the realities of a world that has stolen his little brother, and that isn't even sure it still wants Mann in it. One wrong turn and it could all be over for him, too. Bang.
Sharon G. Flake has an international reputation as a top author for children and young adults. Her breakout novel, The Skin I'm In, established her as a must-read author among middle and high school students, parents, and educators. She has spoken to more than two hundred thousand young people, and hugged nearly as many. Flake has penned nine novels, numerous short stories, plays, and a picture book entitled You Are Not a Cat.

Her work has received numerous awards, such as the Coretta Scott King Honor award and the YWCA Racial Justice Award, and her books have been named to many prestigious lists, including Kirkus Review's Top Ten Books of the Year, Best Books for Young Adults by the American Library Association, Top Ten Books for the Teen Age by the New York Public Library, Top Twenty Recommended Books to Read by the Texas Library Association, 100 Books Every Teenage Girl Should Read, and Booklist Editor's Choice, among others. She lives in Pittsburgh, Pennsylvania. For more information, go to sharonflake.com, or follow her on Twitter @sharonflake.
"Gripping and troubling, Flake paints a provocative picture of teens struggling to deal with a world that is out of control and without adults capable of providing help. Powerful—and disturbing."—Kirkus Reviews

"In a contemporary, hard-hitting survival tale set in a neighborhood where people get shot "for no real reason," Flake (The Skin I'm In ) follows an African-American boy's harrowing initiation into manhood."—Publishers Weekly