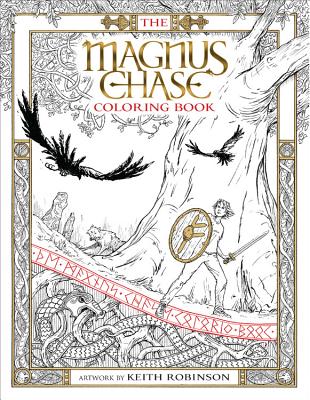 
Special Order—Subject to Availability
Fans of Magnus Chase can bring the Nine Norse Worlds to life with more than 100 images to color.
Einherjar, put down your weapons and prepare for a different kind of contest: the coloring kind!
Magnus's friends from Boston, Hotel Valhalla, and the rest of the Nine Worlds grace the pages of this striking, amusing, and challenging coloring book.
Bring Norse gods and goddesses, magical creatures, and fearsome foes to life by applying your best artistic skills. Odin would expect nothing less.
Rick Riordan, dubbed "storyteller of the gods" by Publishers Weekly, is the author of five #1 New York Times best-selling middle grade series with millions of copies sold throughout the world: Percy Jackson and the Olympians, The Heroes of Olympus, and the Trials of Apollo, based on Greek and Roman mythology; the Kane Chronicles, based on Ancient Egyptian mythology; and Magnus Chase and the Gods of Asgard, based on Norse mythology. Rick collaborated with illustrator John Rocco on two #1 New York Times best-selling collections of Greek myths for the whole family: Percy Jackson's Greek Gods and Percy Jackson's Greek Heroes. Rick is also the publisher of an imprint at Disney-Hyperion, Rick Riordan Presents, dedicated to finding other authors of highly entertaining fiction based on world cultures and mythologies. He lives in Boston, Massachusetts with his wife and two sons. Follow him on Twitter at @camphalfblood.

Keith Robinson is also the illustrator of The Percy Jackson Coloring Book. He graduated with a degree in graphic design and illustration in 1992 and worked as an animator on some of the earliest digital media productions for clients around the world. He joined the BBC and was part of the R&D team that developed the corporation's first website. He later founded Codename, an award-winning media production company, before he became a freelance illustrator in 2001. His illustrations have been featured in children's books, magazines, television programs, and on postage stamps. He especially enjoys drawing fantasy, mythical, and historical subjects. He lives on the south coast of England.
PRAISE FOR THE SWORD OF SUMMER