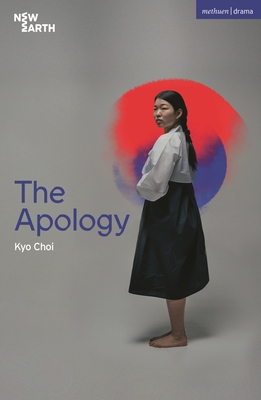 I exist now. Don't tell me that I didn't exist
before.

How should a nation apologise for the crimes of its past? Seoul, 1991. She kept her silence for over forty years. Then Sun-Hee spoke out, igniting a fire that burns to this day. Yuna is about to uncover a shameful family secret. Priyanka, the first United Nations investigator into Violence Against Women, probes the harrowing circumstances of the WWII "comfort women". Three women's lives intertwine as they speak truth to power and confront the atrocity of Japanese military sexual slavery during wartime. Based on true accounts by survivors and historical documents, The Apology is a play about what it takes to forgive. This edition is published to coincide with the world premiere at the Arcola Theatre, UK, in September 2022.
Kyo Choi is a South Korean playwright and screenwriter based in London and Portugal. Her commissioned play by New Earth Theatre, The Apology, will be staged at the Arcola Theatre in September 2022. Last year, she was commissioned by Royal Central School of Speech and Drama to write a play for a large cast - 16 MA Acting students - resulting in Galapagos, performed at Bridewell Theatre in March 2022. She is currently working on a new K-Pop musical commission. Previously, her play readings were staged at the Soho and Arcola Theatres. Kyo was a writer on attachment at the National Theatre Studio where there was a sharing of her play in development. As a screenwriter, she has recently written a landmark Lunar New Year episode for Hollyoaks and is also working with Little House Productions on a biopic film about Wendi Murdoch.