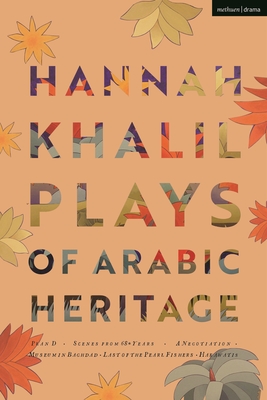 This is the first ever collection of plays by Palestinian-Irish playwright Hannah Khalil; the first woman of Arab heritage to have a main-stage play at the RSC. It encompasses a decade's worth of plays exploring her Arab heritage, drawing on family histories as well as significant events in the Arab World. They were all written during a period that included the end of the war in Iraq, the intensification of the occupation of Palestine and the birth and disillusion of the so called Arab Spring.

The plays included are set in both a historical and modern context. They include a feminist take on 1001 nights and the Scheherazade story; an exploration of Gertrude Bell, the Museum in Baghdad and Britain's role in the birth of the Iraq; plus two plays looking at the Palestinian experience, one based on a family living through the creation of the State of Israel in 1948, the other an epic collage that moves in time from 1948 to present day. This anthology also includes a radio play set in Dubai and a monologue about the power and legacy of artefacts. It's notable that these plays offer a plethora of non-stereotypical roles for actors of Arab heritage. Through the six plays included the reader can trace a variety of approaches to storytelling, a host of memorable characters and some unforgettable stories. Plays include: Plan D
Scenes from 73* Years
A Negotiation
Museum in Baghdad
Last of the Pearl Fishers
Hakawatis
An award-wining writer, Hannah Khalil had her first short play, Ring, selected for the Soho Theatre's Westminster Prize and her first full- length piece, Leaving Home, staged at the King's Head, London. A commission for Rose Bruford at Battersea Arts Centre followed, and she subsequently received support from The Peggy Ramsay Foundation to write Stolen Or Strayed, which received a Special Commendation in the Verity Bargate Award. Further work includes Plan D (published by TCG in their volume Inside/Outside Six plays from Palestine and the Diaspora), which was produced at Tristan Bates Theatre, London, and was nominated for the Meyer Whitworth Award. She has worked with the National Theatre Studio, Royal Court Young Writers' Programme and Tinderbox Theatre, Belfast. Most recently, her play Bitterenders won Sandpit Arts' Bulbul 2013 competition and was produced at Z Space, San Francisco, as part of Golden Thread's ReOrient Festival, and was published by . Her monologue The Worst Cook in the West Bank was performed as part of an evening of short plays about Arab women in the Arab Spring at the Old Red Lion and the Unity Theatre as part of the Liverpool Arabic Arts Festival. The Scar Test was commissioned by Untold Arts and was performed in a scratch performances at the Arcola Theatre in June 2015 and is going on tour in the UK in June 2017