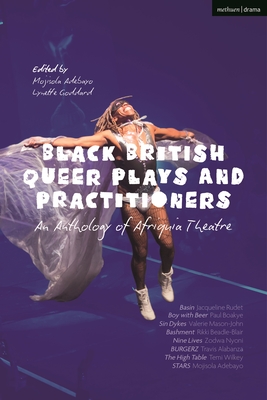 
Not On Our Shelves—Ships in 1-5 Days
A bold play collection representing Lesbian, Gay, Bisexual, Trans, Intersex and Queer (LGBTIQ+) experiences, from Black British perspectives, this anthology contains seven radical plays by Black writers that change the face of theatre in Britain.

With an international reach connecting Africa, the Caribbean and the Diaspora, these plays address themes including same-sex love, sex, homophobia, apartheid, migration, and space travel. The collection captures the historical scope and range of Black British LGBTIQ+ theatre, from the 1980s to 2021. Including a range of forms, from monologue to musicals, realist drama to club-performance, readers will journey through the development of Black Queer theatre in Britain.

Through a helpful critical introduction, this book provides important socio-political and historical context, highlighting and illuminating key themes in the plays. Each play is preceded by an intergenerational 'in-conversation' piece between two Black British LGBTIQ+ artists and writers who will talk about their own work in relation to the play, looking back at the history and on into the future. Through these rare conversations with highly acclaimed award-winning practitioners, readers will also gain an insight into the theatre industry, funding, producing, venues as well as the politics of identity, the diversity of LGBTIQ+ lives and the richness of Black British cultures.

Mojisola Adebayo FRSL is a playwright, performer, producer, director, facilitator and Lecturer at Queen Mary, University of London. She has worked globally in theatre, television, radio, community arts and education, for thirty years, from Antarctica to Zimbabwe. Publications include Mojisola Adebayo: Plays One and Plays Two, (Oberon Books), The Theatre for Development Handbook (Pan) and several academic articles. www.mojisolaadebayo.co.uk Lynette Goddard is Professor of Black Theatre and Performance in the Department of Drama, Theatre and Dance at Royal Holloway, University of London. Their book Staging Black Feminisms: Identity, Politics, Performance explored the landscape of Black lesbians in British theatre from the 1980s to the early 2000s. Contemporary Black British Playwrights: Margins to Mainstream historicises and contextualises the production of Black British plays on mainstream stages in the early 2000s. They also edited Modern and Contemporary Black British Playwrights and selected and introduced the plays in The Methuen Drama Book of Plays by Black British Writers.