Selected Plays by Griselda Gambaro: Siamese Twins; Mother by Trade; As the Dream Dictates; Asking Too Much; Persistence; Dear Ibsen, I Am Nora; The Gi (Paperback) 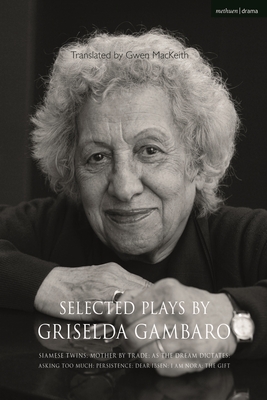 Selected Plays by Griselda Gambaro: Siamese Twins; Mother by Trade; As the Dream Dictates; Asking Too Much; Persistence; Dear Ibsen, I Am Nora; The Gi (Paperback)

Griselda Gambaro is arguably one of Argentina's most important dramatists, as well as a playwright of international significance, whose poetics not only interpret Argentine reality but transcend cultural and geographical borders. Despite international recognition, her plays remain little performed in the UK, an absence which makes this anthology of new translations a welcome contribution to British theatre culture, and to the English-speaking stage.

Prolific since the 1960s, Gambaro's plays are radical, subversive, and endlessly inventive in the use of form and theatricality. This is a theatre of resistance which has the potential to make searing comments on our own domestic and political contexts, an experience which may not be comfortable but is always vital. Dazzling, original, incisive and poetic, this anthology shows Griselda Gambaro at the height of her creative powers. Siamese Twins (1967)
In this charged and forceful play, two brothers (one weak, one strong) play out a primal scene of envy, cruelty and torture as one exerts his power and aggression over the other. Mother by Trade (1999)
In a stark process of truth and reconciliation, a daughter meets her estranged mother forty years after she abandoned her as an infant. As the Dream Dictates (2002)
How can we look to the future if there is great trauma in our past? In this play, only the untethered thinking that comes with dreaming allows us the freedom to imagine. Asking Too Much (2004)
In this enigmatic two-hander, the roles played by a man and a woman in the game of human attachment are renegotiated. Persistence (2007)
Inspired by the real life event of the 2004 Beslan massacre in Russia, Persistence is a poetic play which goes to the heart of human tragedy. Dear Ibsen, I Am Nora (2013)
Nora, the character created by Henrik Ibsen in A Doll's House, decides to confront her creator and to debate with him her own words and actions. The Gift (2015)
M rgara is a woman with the gift of prophecy... but people do not believe her, even though she predicts hope for the world. Will humanity be able to hear her?
GRISELDA GAMBARO was born in Buenos Aires in 1928. She is celebrated both as playwrightand novelist and has published fiction for children and teenagers, as well as a collection of essays, alongside her drama and novels. Gambaro is the recipient of numerous prestigious awards includingfrom UNESCO, the Argentine National Fund for the Arts (Argentores), the Di Tella Foundation, theArgentine Academy of Letters and the Guggenheim Foundation. GWEN MACKEITH is a writer and literary translator based in London. She acted as ResearchAssociate for the AHRC-funded project, Out of the Wings: Spanish and Spanish American Theatresin Translation, from 2008 to 2012, at King's College London. She has edited fiction for the artsquarterly Ambit Magazine and teaches creative writing.