The Politics and Rhetoric of Commemoration: How the Portuguese Parliament Celebrates the 1974 Revolution (Bloomsbury Advances in Critical Discourse Studies) (Paperback) 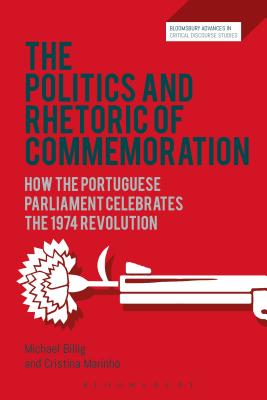 The Politics and Rhetoric of Commemoration: How the Portuguese Parliament Celebrates the 1974 Revolution (Bloomsbury Advances in Critical Discourse Studies) (Paperback)

In recent years there has been much interest in collective memory and commemoration. It is often assumed that when nations celebrate a historic day, they put aside the divisions of the present to recall the past in a spirit of unity. As Billig and Marinho show, this does not apply to the Portuguese parliament's annual celebration of 25 April 1974, the day when the dictatorship, established by Salazar and continued by Caetano, was finally overthrown. Most speakers at the ceremony say little about the actual events of the day itself; and in their speeches they continue with the partisan politics of the present as combatively as ever.

To understand this, the authors examine in detail how the members of parliament do politics within the ceremony of remembrance; how they engage in remembering and forgetting the great day; how they use the low rhetoric of manipulation and point-scoring, as well as high-minded political rhetoric. The book stresses that the members of the audience contribute to the meaning of the ceremony by their partisan displays of approval and disapproval. Throughout, the authors demonstrate that, to uncover the deeper meanings of political rhetoric, it is necessary to take note of significant absences. The Politics and Rhetoric of Commemoration illustrates how an in-depth case-study can be invaluable for understanding wider processes. The authors are not content just to uncover unnoticed features of the Portuguese celebration. They use the particular example to provide original insights about the rhetoric of celebrating and the politics of remembering, as well as throwing new light onto the nature of party political discourse.
Michael Billig has been Professor of Social Sciences at Loughborough University, UK, since 1986. He was previously a lecturer in Psychology at Birmingham University, UK. He is a Founder member of the Discourse and Rhetoric Group at Loughborough University. Cristina Marinho is at Nottingham Trent University, UK.