Saving Jemima: Life and Love with a Hard-Luck Jay (Hardcover) 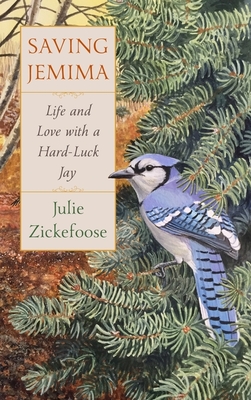 Saving Jemima: Life and Love with a Hard-Luck Jay (Hardcover)


Not On Our Shelves—Ships in 1-5 Days
For fans of Wesley the Owl and The Soul of an Octopus, the story of a sick baby bird nursed back to health and into the wild by renowned writer/artist Julie Zickefoose.

When Jemima, a young orphaned blue jay, is brought to wildlife rehabilitator Julie Zickefoose, she is a virtually tailless, palm-sized bundle of gray-blue fluff. But she is starved and very sick. Julie’s constant care brings her around, and as Jemima is raised for eventual release, she takes over the house and the rest of the author's summer.

Shortly after release, Jemima turns up with a deadly disease. But medicating a free-flying wild bird is a challenge. When the PBS show Nature expresses interest in filming Jemima, Julie must train her to behave on camera, as the bird gets ever wilder. Jemima bonds with a wild jay, stretching her ties with the family. Throughout, Julie grapples with the fallout of Jemima’s illness, studies molt and migration, and does her best to keep Jemima strong and wild. She falls hard for this engaging, feisty and funny bird, a creative muse and source of strength through the author’s own heartbreaking changes.

Emotional and honest, Saving Jemima is a universal story of the communion between a wild creature and the human chosen to raise it.

Writer/artist JULIE ZICKEFOOSE is fascinated by the interface of birds and people. She is the author of Natural Gardening for Birds; Letters from Eden: A Year at Home, in the Woods; The Bluebird Effect: Uncommon Bonds With Common Birds; and Baby Birds: An Artist Looks Into the Nest. She is the only person ever to specialize in painting the day-to-day development of nestling birds. Studying blue jays, a familiar yet deeply mysterious species, has opened a new world to her. She lives and documents the lives of birds, bobcats, coyotes, deer, and other wildlife on an 80-acre sanctuary in southeast Ohio.

“A most intimate book about life, change, and the care of a nestling blue jay… Zickefoose has produced another hard-to-put-down winner!”—Booklist, *starred* review   “A heartwarming account for all interested in natural history, especially birds, animal behavior, and wildlife rehabilitation.”—Library Journal   "All blue jays have a penchant for stealing, but Jemima will steal your heart. Three cheers for this spunky baby bird! And three more for Julie Zickefoose, whose skilled and loving care saved Jemima's life—and whose glorious watercolors and riveting personal narrative brings Jemima Jay alive for us lucky readers. I loved this book and you will, too." —Sy Montgomery, author of How to Be A Good Creature   "Zickefoose’s engaging portrayal of Jemima is a great read. Beyond setting the record straight about the misunderstood role of imprinting, it is a work of love and passion for living and an appreciation of the natural world through the ambassador of a charismatic blue jay." —Bernd Heinrich, author of Mind of the Raven and The Geese of Beaver Bog    "It’s amazing to be inspired by the grit and creative determination of a small blue jay but that’s exactly how the reader will feel, along with joy, pain, fear, relief, and compassion for plucky Jemima. She prevails against all odds, using her magnificent corvid brain to overcome every obstacle. This is not just a bird watcher’s story, but will touch all readers. Warm, joyful, deep, passionate, and multilayered, I recommend this book to everyone." —Stacey O'Brien, author of Wesley the Owl   "Saving Jemima is a guide to living one’s life with kindness and courage. Julie Zickefoose is a poet, a philosopher, and a woman who takes life as it comes and makes each day a triumph. Like Julie (and like Jemima) you will crash and soar and learn to hold the delicacy of life gently in the palm of your hand." —Jane Stern, author of Ambulance Girl    "Saving Jemima is a story about an orphaned blue jay, but it is also about saving ourselves by letting go of the things we love. Julie Zickefoose describes Jemima in exquisite detail, the intricacies of raising her from babyhood to release, and the sorrows of the last goodbye. It is a beautiful portrait. I will never look at a blue jay in the same way again." —Jane Alexander, actress, conservationist, and author of Wild Things, Wild Places —