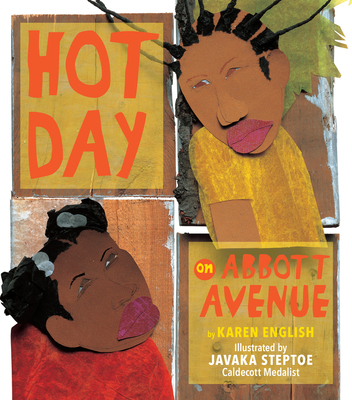 It's the hottest, stickiest day of the summer. A fat-sun-in-the-sky day. An eating-ice-pops-on-the-porch day. And for Kishi and Renée, it's a best-friends-breakup day. Each girl sits on her own front porch, waiting for the other to apologize, even though they know they'll never speak to each other again, no matter how bored they get. But then the sounds of feet slapping the pavement and voices chanting double-dutch rhymes drift up the avenue, and neither one can resist going out in the street to play.

This lyrical friendship story, the first collaboration of two outstanding artists, pairs a rhythmic text with distinctive collage illustrations. Its subtle message about sharing and forgiveness will resonate with anyone who has ever experienced the ups and downs of being, and having, a best friend.

Karen English is a Coretta Scott King Honor Award-winner and the author of It All Comes Down to This, a Kirkus Prize Finalist, as well as the Nikki and Deja and The Carver Chronicles series. Her novels have been praised for their accessible writing, authentic characters, and satisfying storylines. She is a former elementary school teacher and lives in Los Angeles, California.

Javaka Steptoe is a Caldecott Medalist, Coretta Scott King Award winner, and New York Times best-selling picture book creator. He has illustrated several books for children, including Jimi: Sounds Like a Rainbow, A Story of the Young Jimi Hendrix by Gary Golio, A Pocketful of Poems by Nikki Grimes, and Radiant Child, which he also wrote. He lives in Brooklyn, New York. Visit him online at javaka.com and on Twitter @javaka_steptoe.

"English has childhood spats down pat...both original and emotionally effective...full of movement and energy and joy...'So good!' "