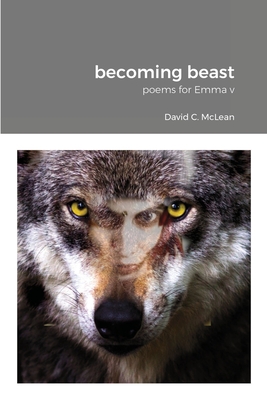 
Not On Our Shelves—Ships in 1-5 Days
(This book cannot be returned.)
This is the fifth volume in McLean's "poems for Emma" series. It is about how Emma helped him leave humanity behind & enter an intense animal state, a form of posthuman being, where posthumanism is seen similarly to how Lyotard sees postmodernism as prior to modernism, & in some ways a crisis state of modernism. As he usually does, McLean draws on another Lyotardian idea, that of intensity as presented in "Libidinal Economy", as well as Deleuze & Guattari's becoming-animal. It is an intensity prior to linguistic distinctions & a real becoming that produces no actual end state animal. The words "real" & "actual", as always, are used in this book with their philosophical rather than their everyday meanings. There is naturally a BDSM theme that recurs in this book, since it contains love poetry. There is a religious element too. The cover is designed by McLean using an image owned by Emma. "here is beast identity, whatever i am savage & real in me, not actual, not the product the actual animal, but identity being claw & fang absence & flesh us fuck forever, Emma, flesh us fuck forever.