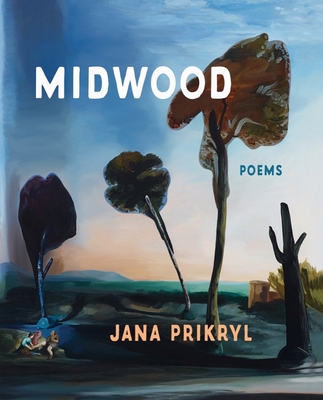 Midwood is a restless and intimate volume from a poet James Wood has called “one of the most original voices of her generation.”

In her third book, Jana Prikryl probes the notion of midlife, when past and future blur in the equidistance. Balancing formal innovation with deeply personal reflection, Midwood subtly but impiously explores love and sex and marriage and motherhood in plain, urgent language. Written for the most part early every morning over the course of a year, in all its changing seasons, Midwood includes a series of poems looking at and talking to trees; Prikryl’s careful attention to the ordinary world outside the window forms an alternative measure of time that leafs and ramifies. With their rapid shifts of scale and unusual directness, these poems find a new language for confronting our moment.

Jana Prikryl was born in the Czech Republic and moved to Canada at the age of six. She is the author of three books of poems, Midwood, No Matter, and The After Party. The recipient of a Guggenheim Fellowship, a Radcliffe Fellowship, and an Award in Literature from the American Academy of Arts and Letters, Prikryl lives in Brooklyn and works as an editor at The New York Review of Books.
This is part of the pleasure of reading Prikryl’s poems, the sense of exhilaration that accompanies their disintegrations, the little moments of free fall before something stable is once more given—some unexpected image or situation—to stand upon... If midlife has brought Midwood, readers must be grateful for its startling, unreconciled, and compassionate view. Though at times despairing, this is not the work of despair. Rather, Prikryl’s poems uncover a consoling order within the richness of catastrophe: 'the absence of meaning / also is a guide.'

[Prikryl's] most recent [book], Midwood, makes clear and unmistakable the increasing singularity of her artistry... Individual poems have such an invulnerable coolness and gleaming angularity that I also can’t help but admire how assuredly they distinguish Prikryl from her contemporaries. Midwood’s poems do not invite, shock, take stock, allure, or comfort; they 'move through each other’ and, slipping out from under our grasp and our presumptions, go their 'own way.’ They, at every turn, resist us. Perhaps only for poetry could this assessment be considered a point of profound admiration.

Jana Prikryl is a poet of unique gifts: unexpected images, ingenious syntax, and wide-ranging erudition. But whereas others might have settled for armored virtuosity, she has created something rarer and more original—a voice that is witty, ironic, and despairing in the manner of her great Eastern European predecessors and fused with dazzling linguistic agility. Or freedom, we might say. A mutation not unlike Nabokov’s in the vast playground of the English language.
— Louise Glück, winner of the Nobel Prize in literature

Though [these] poems may not, at first glance, appear explicitly political—they are brief, loosely punctuated, and contemplative in their approaches to motherhood, middle age, and the natural world—they are works that, in their hyper-specificity of place and setting, actually undermine the grip that borders (of both the national and metaphoric variety) can hold... [Prikryl] creates a fusion between past and present that serves as a way station between two different sets of selves, two different sets of histories, and two different women. To be in the middle, then, is to embrace the abstraction of the in-between, the indeterminate... And with Midwood, Prikryl traverses this liminal space with the careful eye of a seasoned traveler.

‘When reserve of this variety / combines with stillness’ the result is Jana Prikryl’s Midwood, the best and most original new book of poems I have read in years. These poems operate like the game of Jenga: each new word and phrase, each fresh formal idea, every startling turn of thought threatens to topple the entire structure.… Midwood is daredevil work, at once nerve-racked and careening, ecstatic. It is, as far as I’m concerned, simply how the game is played.

A modern, sensitive, and satisfying contemplation of different physical and figurative midpoints... [Prikryl's poems] are straightforward but linguistically complex, and always elegant in their economy... These are smart, inquisitive pieces that play with the philosophical underpinnings of language and poetic structure.
— Mandanna Chaffa - Ploughshares

The poems in Jana Prikryl’s third collection are restless and radiant. In this idyllic landscape of lounge and scatter, home is over rooftops and snowbanks, across time and overseas. Midwood is as much voyage as daydream. I can’t wait to read it again.

At the heart of Midwood is a violent curiosity that details of the world are drawn into, reemerging changed. Prikryl creates atmosphere with unnerving speed—these poems are almost gothic, though their mood is entirely of the present, and individually they soon had me in their thrall. But the book as a whole is something else again. Finishing it feels like surfacing from a film, a novel, a dream, a series of dreams circling a source ‘refusing to give us / the key because there was no key.’ Midwood is a strange, thrilling collection from a singular voice.