Read Until You Understand: The Profound Wisdom of Black Life and Literature (Paperback) 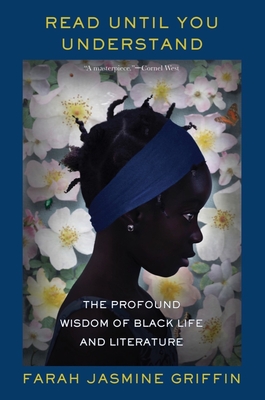 Read Until You Understand: The Profound Wisdom of Black Life and Literature (Paperback)

A PBS NewsHour Best Book of the Year

A Publishers Weekly Best Book of the Year in Nonfiction

A brilliant scholar imparts the lessons bequeathed by the Black community and its remarkable artists and thinkers.

Farah Jasmine Griffin has taken to her heart the phrase "read until you understand," a line her father, who died when she was nine, wrote in a note to her. She has made it central to this book about love of the majestic power of words and love of the magnificence of Black life.

Griffin has spent years rooted in the culture of Black genius and the legacy of books that her father left her. A beloved professor, she has devoted herself to passing these works and their wisdom on to generations of students.

Here, she shares a lifetime of discoveries: the ideas that inspired the stunning oratory of Frederick Douglass and Malcolm X, the soulful music of Marvin Gaye and Stevie Wonder, the daring literature of Phillis Wheatley and Toni Morrison, the inventive artistry of Romare Bearden, and many more. Exploring these works through such themes as justice, rage, self-determination, beauty, joy, and mercy allows her to move from her aunt’s love of yellow roses to Gil Scott-Heron’s "Winter in America."

Griffin entwines memoir, history, and art while she keeps her finger on the pulse of the present, asking us to grapple with the continuing struggle for Black freedom and the ongoing project that is American democracy. She challenges us to reckon with our commitment to all the nation’s inhabitants and our responsibilities to all humanity.

Farah Jasmine Griffin is professor of African American and African diaspora studies and English and comparative literature at Columbia University. She is the author of Read Until You Understand, among other works. Recipient of a 2021 Guggenheim Fellowship, she lives in New York.
Quietly captivating…This is a life lived among books, and reinterpreted through them.
— Carols Lozada - Washington Post

A book like Read Until You Understand takes courage to produce…Griffin’s evangelizing of Black literature does what the best sermons do: It sends you back to Scripture—Baldwin, Coates, Morrison, David Walker and others—to discover or rediscover them, to ponder and treasure them anew.

Now a noted scholar of African American literature, Griffin shares, in a blend of memoir and criticism, the fruits of her lifelong journey to fulfill that aspiration [to read until you understand]… She also richly evokes her childhood in Philadelphia, long a hub for Black activism where she belonged…to a family whose women, skilled seamstresses and gardeners, cultivated beauty.
— New Yorker

Griffin's effortlessly warm and engaging writing merges personal memoir with history in a way that emphasizes the oneness of the fabric of humanity…With both grace and mercy, Griffin's Read Until You Understand is a thorough exercise in Black thought, Black anger, and Black joy.

Griffin has produced a volume of academic criticism for the masses….Farah Jasmine Griffin belongs among the grand tradition of African American thinkers that she studies. Read until you understand — and then read some more.
— Christopher Maverick - Pittsburgh Post-Gazette

Read Until You Understand is brought to life through Griffin’s account of the ways in which Black culture was an integral part of her being…Griffin is driven by a belief that the cultivation of aesthetic appreciation—in which the beautiful and the political do not compete—is where real change can be found. It is a book that acknowledges life’s conflicts while still valuing hope and beauty.

The perfect storm of imagination, research, compassion, and intellectual analysis. [Read Until You Understand] soars to a new level of wisdom, community love, and enlightenment for readers and critics alike.

The insight and joy bursts from Read Until You Understand authored by one of the greatest literary scholars of our time. Thank you Farah Jasmine Griffin for this sage gift, for packaging all these sage gifts for us.

Griffin writes with learned poignance…Perfect for literature lovers, this survey and its moving insights will stick with readers well after the last page is turned.
— Publishers Weekly (starred review)

Farah Jasmine Griffin is one of the few great intellectuals in our time! This wise and powerful memoir is a masterpiece. Griffin beautifully weaves her profound devotion to the life of the mind with her deep and abiding love of Black people and culture. Her magical words enchant and empower us like those of her towering heroes—Toni Morrison, Billie Holiday, James Baldwin, and Wilhelmena Griffin!
— Cornel West

Farah Jasmine Griffin’s vivid, passionate, and powerful tribute to the great gifts of Black culture offers a deep dive into such fundamental human themes as freedom, justice, rage, death, beauty, and love, as lived and celebrated through her own experience, music, and creative art, and that of countless others in the community she embraces, from the legacy of Black history to her own family, her wide explorations of literature and art, and her close friendships with many artists and writers.
— Elaine Pagels

Read Until You Understand gives us Farah Jasmine Griffin in full and mighty sail. Keen cultural analysis, storytelling, and gorgeous lyricism combine in this book that makes a genre of its own. In recollection there is profound insight here; we have a portrait of a rich Black community in place and time, and of the teachers Griffin finds in neighborhood, family, books, and music. The sounds, words, and wisdom that Black folks make also make us, and no one expresses that with more beauty and power than Griffin. This book is a talking book, a teaching book, and a treasure.